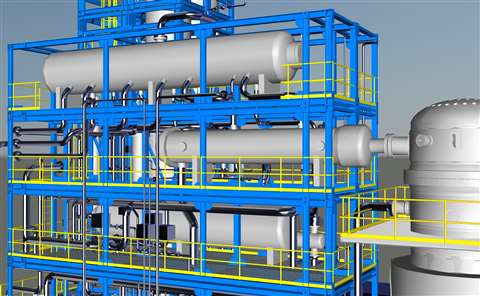 The plant will convert woody biomass in the form of pre-commercial thinnings and forest residue from East Texas to produce syngas, which will be processed into methanol and then green gasoline. (Image: Modular Plant Solutions.)

Arbor Renewable Gas has hired Modular Plant Solutions (MPS) to build the first of its kind modularized green gasoline plant near Beaumont, Texas. The plant will convert woody biomass in the form of pre-commercial thinnings and forest residue from East Texas to produce syngas, which will be processed into methanol and then gasoline.

The last stage of production employs Haldor Topsoe’s TIGAS gasoline synthesis technology, resulting in an output of “drop-in” renewable biofuel that meets the stringent quality specifications for California fuels, as well as the Low Carbon Fuel Standard, adopted by states such as California, with Oregon, the European Union and British Columbia following similar standards.

The plant will produce about 1,000 barrels per day of high quality, environmentally responsible renewable gasoline produced in compliance with the EPA rules under the Renewable Fuel Standard. Once produced, the gasoline will be shipped to consumers that require the fuel under the Low Carbon Fuel Standard (LCFS.)

Construction of the Spindletop Plant is scheduled to be complete in 2024. Once built, it will be the first Methanol-To-Go plant that MPS has sold.

MPS will provide its MeOH-To-Go, a Methanol-To-Go modular plant for the project, and will manage the engineering and technology partners for the entire plant, from procurement and construction to operation. MPS’ modularization process and patent-pending ISO frame-based modular design for the plant will streamline transportation of plant components, making it easier to assemble and minimizing construction issues.

“Being part of the production of this innovative modular green gasoline plant is a pivotal moment for the future of renewable fuel in the U.S. and for our company, especially as world events are putting a spotlight on fuel supplies,” said Russell Hillenburg, president and co-founder of MPS. “The way we’ve designed our Methanol-To-Go modular plant allows customers to modify the feedstock for methanol production based on the resources they have on hand.”

“We are excited to be working with the team at MPS to bring our vision to life: producing cost-effective, safe and reliably sourced woody biomass-to-renewable gasoline,” said Timothy Vail, president and CEO of Arbor Renewable Gas. “In the future, MPS’ plants, expertise and modularization design approach will allow Arbor to expand our operations and bring more renewable gasoline plants online on a cost and schedule effective basis.”

Because MeOH-To-Go was designed to allow for a variety of front-end feedstock options and technology processes, as well as back-end add-on technology processes, customers can change inputs and outputs to achieve various goals depending on their needs. The plant for Arbor Renewable Gas’ Spindletop project will use woody biomass as feedstock, converted via gasification to synthesis gas.

Other feedstock options for MeOH-To-Go plants include various compositions of syngas or natural gas that are converted to AA grade methanol, a basic building block in the production of several chemical derivatives.

MPS has two other plant options in the design phase: DME-To-Go, an add-on option for MeOH-To-Go plants to produce Dimethyl Ether (DME), a clean burning alternative diesel fuel, as well as Gasoline-To-Go, a small-scale modular plant to produce 88 Octane gasoline.

Modular Plant Solutions (MPS) is a global engineering firm specializing in process modularization and project implementation based in Friendswood, Texas, outside Houston. The company’s patent-pending modularized structural system is designed for customers seeking cost-effective, easily transportable, scalable solutions for plant design that can be shipped and assembled anywhere in the world. The company’s flagship product, MeOH-To-Go, enables users to produce their own methanol output from various natural gas sources and/or syngas.

Customers can also customize inputs and outputs of MeOH-To-Go depending on what they have or need with a variety of front-end and back-end technology and process options.

Haldor Topsoe produces catalysts, technology, and services to the chemical and refining industries. Topsoe aims to be the global leader within carbon emission reduction technologies by 2024.

In November, Arbor Renewable Gas announced it had selected a 53-acre site in Beaumont, Texas as the home of its first renewable gasoline plant. The “Spindletop Plant” is located on the Beaumont, Nederland border. The site was selected for its access to critical infrastructure and feedstock as well a talented and experienced workforce, along with longstanding community support for modern fuel plants. 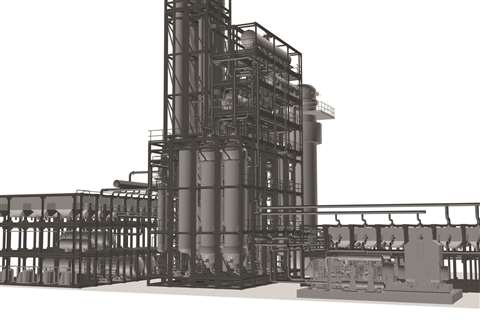