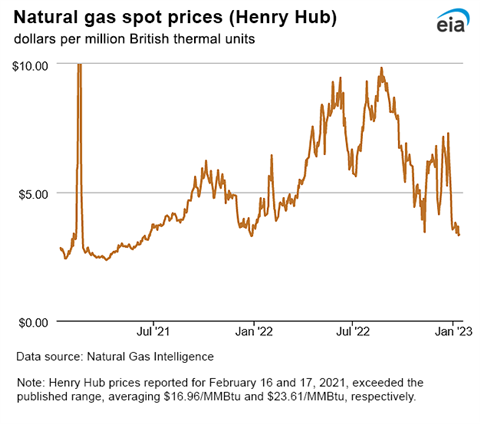 U.S. gas consumption, production and exports broke records in 2022, according to data released recently from the U.S. Energy Information Administration.

Natural gas consumption in the U.S. reached record levels in 2022 in part because of increased use of gas in the electric power sector. Domestic natural gas consumption averaged 88.7 Bcf/d in 2022, up 6% from the previous year. Electric power consumption averaged 33.3 Bcf/d, an all-time high and up 8% from 2021, boosted by the third hottest summer on record and strong demand for air conditioning in July, the EIA reported in its January Short-Term Energy Outlook.

Natural gas prices were high in 2022, when compared with the previous five years, but the consumption of coal fell in response to high coal prices below average stockpiles. Total gas consumption in the residential sector rose 5% and 7% in the commercial sector in 2022.

Natural gas inventories in the U.S. were generally low in 2022 when compared to historical norms. Temperature-related demand increases outpaced production growth and lower than normal temperatures during the 2021 – 2022 heating season pulled gas inventories down to a three-year low of 1387 Bcf on March 31, down 17% for the five-year average for that time. Net withdrawals rose to a four-year high during the 2021 – 2022 heating season. During the refill season, from April to October 2022, higher than normal summer temperatures led to lower than average net injections into storage.

Mild temperatures and higher production led to stronger than average net injections in September and October. As a result, U.S. gas storage ended the refill season 3% below the previous year and the five-year average, the EIA reported.

The 2022 average wholesale spot price at Henry Hub was $6.45/MMBtu, the highest in real and nominal terms since 2008, based on data from Refinitive Eikon. Daily prices reached a high of $9.85/MMBtu on Aug. 22 and a low of $3.46/MMBtu on Nov. 9, with prices showing unusual volatility throughout the year.

Additional pipeline infrastructure in the Permian and other regions boosted the capacity to transport natural gas to Gulf Coast export terminals. More than 60% of LNG exports went to the European Union from January through October, displacing Asia as the top market for US LNG.

In addition, the EIA released its first forecast for 2024: $4.80/MMBtu. It said prices will continue to fall as growth in domestic production is expected to outpace an increase in LNG exports that stem from rising LNG export capacity. Natural gas production in the Permian and Haynesville is expected to continue to climb with the addition of new infrastructure projects in 2023 and 2024, the EIA reported. 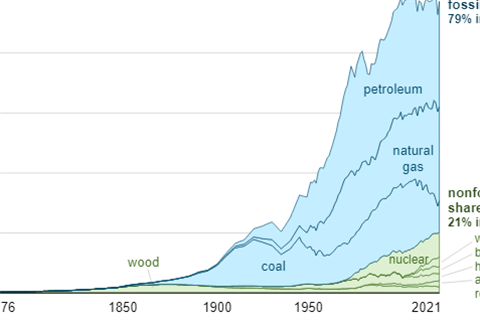