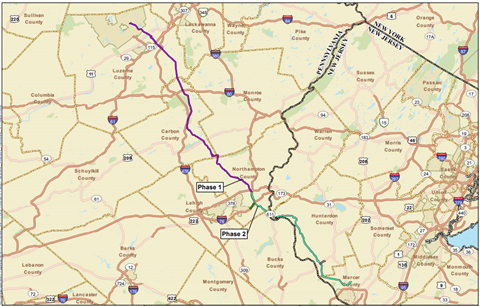 The U.S. Supreme Court overruled an appellate court’s decision to block the ability of a pipeline company to seize state-owned land under eminent domain. The decision allows PennEast Pipeline Co. to move forward on a planned 116-mile gas pipeline through Pennsylvania and New Jersey.

The 5-4 ruling rejected New Jersey’s argument that sovereign immunity protects the state from being sued by PennEast. If completed, the line would transport up to 1 Bcf/d of gas from northern Pennsylvania to New Jersey.

At issue in the case was a provision within U.S. Natural Gas Act that allows pipeline companies to use the federal government’s eminent domain power. The U.S. Federal Energy Regulatory Commission approved the pipeline in 2018, and PennEast later sued New Jersey to gain access to more than 40 parcels that it owns or controls. PennEast is a joint venture of five pipeline companies: NJR Pipeline Co., SJI Midstream, Southern Company Gas, Spectra Energy Partners and UGI Energy Services.

The ruling asserted that private parties have federal power to acquire lands needed for national infrastructure projects, provided the federal government has delegated that authority to them. The court rejected New Jersey’s legal argument that sovereign immunity protects the state from being sued by PennEast.

Despite the legal victory to seize state lands, PennEast must still get state-level permits to build the pipeline. Bloomberg Intelligence analyst Brandon Barnes said the project still has “low odds” because of the ongoing opposition in the state.

“We are pleased that the Supreme Court kept intact more than seven decades of legal precedent for the families and businesses who benefit from more affordable, reliable energy,” said Anthony Cox, chairman of PennEast board of managers.

“This decision is about more than just the PennEast project; it protects consumers who rely on infrastructure projects, found to be in the public benefit after thorough scientific and environmental reviews, from being denied access to much-needed energy by narrow state interests.”

PennEast argued that New Jersey sued for political purposes, but added that energy crises in California, Texas and New England have shown that the interstate natural gas infrastructure is “vital” to public safety and clean energy goals.

Officials from New Jersey vowed to continue opposing the project. The decision “is not the end of the road in our fight against the PennEast pipeline,” New Jersey Attorney General Gurbir Grewal said. “We still have other, ongoing legal challenges to this proposed pipeline, which is unnecessary and would be destructive to New Jersey lands.”

Chief Justice John Roberts said the federal government can constitutionally delegate its power to use eminent domain to secure land-use rights -- even if that means suing a state. Roberts said that authority helped fulfill the constitutional framers’ goal of a “cohesive national sovereign.”

“Over the course of the nation’s history, the federal government and its delegatees have exercised the eminent domain power to give effect to that vision, connecting our country through turnpikes, bridges, and railroads -- and more recently pipelines, telecommunications infrastructure, and electric transmission facilities,” Roberts stated in the ruling.

A commentary by Forbes magazine noted that although the ruling was, at first glance, a setback for local environmentalists, it may have broader implications that they may actually support. The ruling may give the FERC a precedent to overrule state objections to expand wind turbine projects, solar fields and high-voltage interstate transmission lines that will be required to get renewable energy to cities.