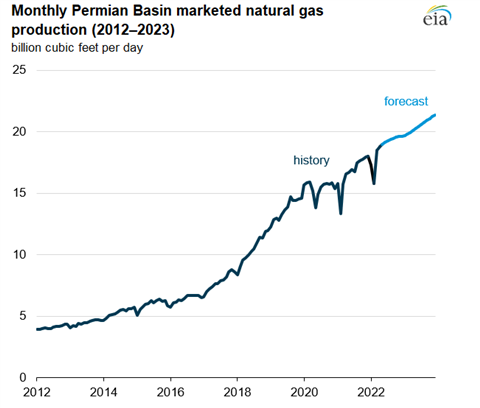 The differential in natural gas prices at Henry Hub and the west Texas hub at Waha has widened in the last few months in response to growing production in the Permian basin and regional pipeline maintenance, a recent study has shown.

Maintenance on regional pipelines moving natural gas from the Permian to consuming markets has also contributed to a wider price differential, the U.S. Energy Information Administration has reported.

On May 2, natural gas flows on Kinder Morgan’s Permian Highway Pipeline out of the region decreased and the Waha Hub price fell to $1.82/MMBtu below Henry Hub. In August, maintenance on the El Paso Natural Gas Pipeline, which reduced flows from West Texas into the Desert Southwest and California, contributed to the Waha Hub price discount to Henry Hub reaching $1.78/MMBtu on August 26.

In 2021, additional pipeline capacity to transport natural gas out of the Permian production region was put in service and the price differential between Waha Hub and Henry Hub narrowed. Increased pipeline capacity enabled producers to deliver natural gas from the producing area to demand centers in Mexico and along the Texas Gulf Coast, including liquefied natural gas (LNG) export facilities.

Since April 2022, additional four new pipeline projects to deliver natural gas out of the Permian production region have been announced and, if completed as planned, would expand pipeline takeaway capacity by approximately 4.2 Bcf/d by the end of 2024. Three of those four new projects will expand capacity on existing pipelines and one is a brand new pipeline.

In May, Kinder Morgan announced the Gulf Coast Express Pipeline Expansion, which will expand compression in the line and boost capacity by 0.57 Bcf/d to 2.55 Bcf/d. The project is expected to enter service by December 2023.

The Permian Highway Pipeline Expansion, which reached a final investment decision by Kinder Morgan on June 29, will also expand compression, increasing capacity by 0.55 Bcf/d to 2.65 Bcf/d. The project is expected to enter service in November 2023.

WhiteWater and MPLX (a joint venture between Stonepeak and West Texas Gas), said it would expand the Whistler Pipeline by installing three new compressor stations, increasing capacity by 0.5 Bcf/d to 2.5 Bcf/d. The project is expected to enter service in September 2023.

Meanwile, Whitewater, ENlink Midsteram, Devon Energy Corp. and MPLX announced it would build the Matterhorn Express Pipeline is a joint venture among WhiteWater, EnLink Midstream, Devon Energy Corp, and MPLX. This pipeline will be 490 miles long and will be able to transport up to 2.5 Bcf/d of natural gas from the Waha Hub in West Texas to Katy, Texas. The pipeline will receive natural gas from upstream Permian Basin connections and from direct connections at processing facilities in the Midland Basin before connecting to the Agua Blanca Pipeline. The pipeline is expected to enter service in the third quarter of 2024.