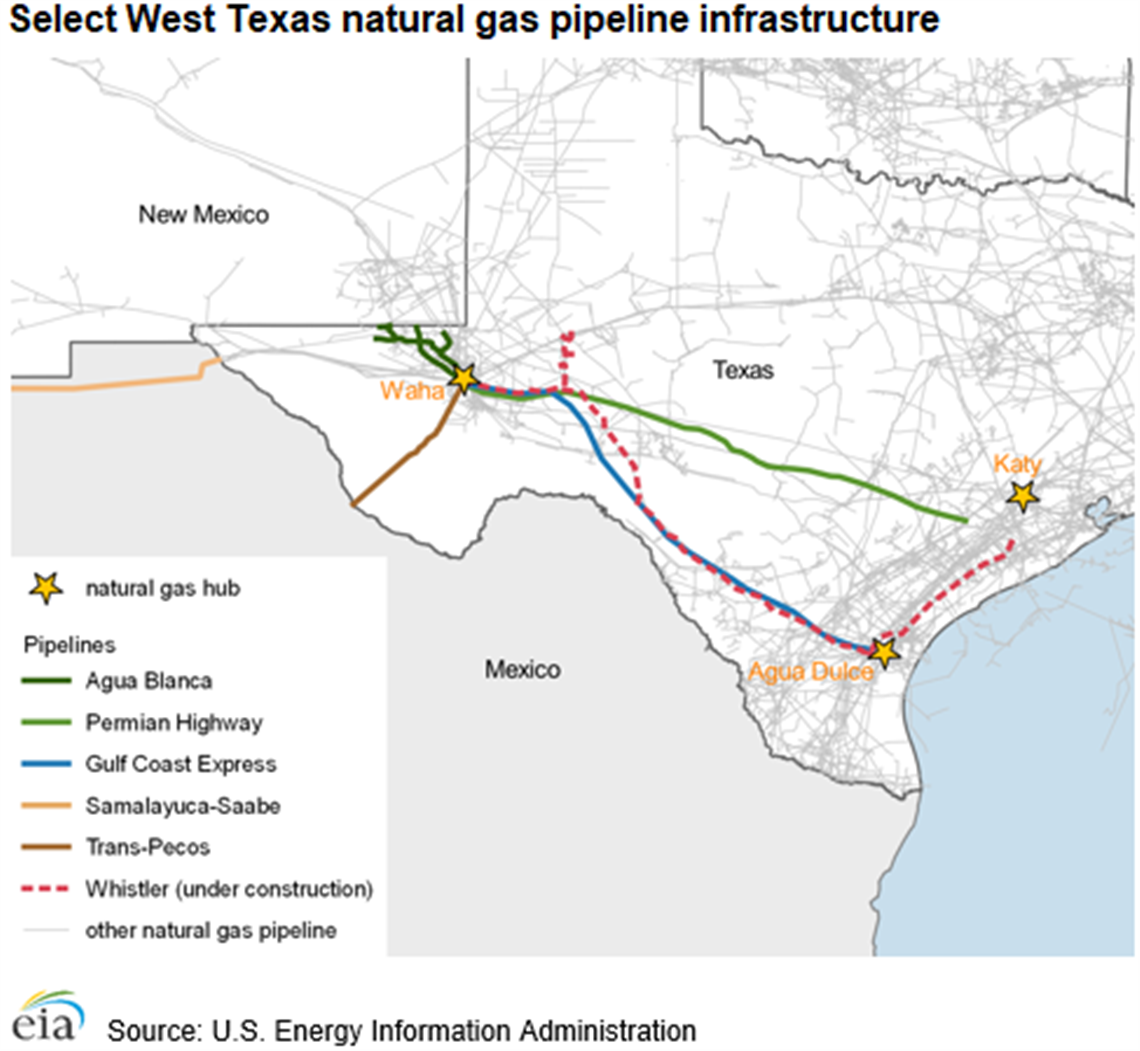 A series of recently completed pipeline projects have combined to boost U.S. natural gas exports to Mexico nearly 10%, according to recent figures from the U.S. Energy Information Administration (EIA). Gas exports to Mexico have risen by 0.55 Bcf/d to 5.9 Bcf/d from March 2020 to March 2021.

Preliminary statistics from IHS Markit show that trend continued in April and May, averaging about 6.1 Bcf/d, up 31% from a year ago. The increased takeaway capacity from the Permian has boosted prices at the Waha hub in West Texas and narrowed the discount to prices at Henry Hub.

Those recent infrastructure projects include two completed by pipeline giant Kinder Morgan, which commissioned the 2.1 Bcf/d Permian Highway Pipeline in January. That pipeline delivers gas from the Waha hub in West Texas to Katy, Texas and has additional connections to Mexico. That pipeline follows the 2.0 Bcf/d Kinder Morgan Gulf Coast Express pipeline, which entered service in September 2019 and delivers gas from Waha to Agua Dulce, Texas on the Gulf Coast.

In addition, the Whitewater/MPLX Agua Blanca Expansion project connects nearly 20 natural gas processing sites in the Delaware Basin. That project entered service in late January and can move 1.8 Bcf/d of natural gas to the Waha hub. Eventually that project will also connect with the Whistler Pipeline, scheduled to be completed in Q3 2021. That pipeline would take an additional 2.0 Bcf/d of gas from the Permian Basin to the Texas Gulf Coast.

On the Mexico side of the border, Carso Energy completed the 0.5 Bcf/d Samalayuca – Sasabe pipeline in late January. That pipeline provides a more direct route for gas from the Permian Basin to reach a regional market. The 0.9 Bcf/d Villa de Reyes-Aguascalientes-Guadalajara (VAG) pipeline began commercial operations in October. That is the final segment of the Wahalajara System, which connects the Waha Hub to Guadalajara and other population centers in west-central Mexico.

The combined effect of the additional infrastructure has forced the discount for gas at Waha Hub to Henry Hub to narrow abruptly. Over most the last three years, limited pipeline capacity from the Permian Basin has driven prices at Waha consistently lower, as much as $1 per MMBtu, under prices at Henry Hub. But starting in late October 2020, the Waha-Henry Hub basis spread began to narrow to the point where the Waha Hub prices averaged only $0.22/MMBtu under the price at Henry Hub.

The EIA calculates demonstrated peak capacity as the total of the highest storage levels reached by each storage facility during any month during the most recent five-year period. This measure reflects how storage facilities were actually used rather than how they were designed. Overall demonstrated peak capacity in 2020 fell by 8 Bcf compared with 2019, despite reported increases in five of the six regions in the Lower 48 states.

Demonstrated peak capacity fell by 34 Bcf in the Pacific region because the previous peak levels, which preceded a 2015 leak in the Aliso Canyon natural gas storage facility in California are no longer included in the five-year period.