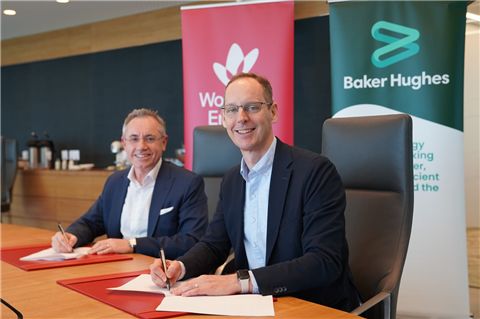 Baker Hughes will explore how its portfolio of solutions have the potential to support Woodside’s climate strategy including:

“Collaborations provide a pathway to help solve the challenges we face in our industry today and into the future,” said Daniel Kalms, executive vice president of Technical Services for Woodside Energy. “We look forward to working with Baker Hughes to identify technology solutions that could have the potential to support Woodside’s climate strategy.”

“A full range of technologies and solutions are needed to help the energy industry and hard-to-abate sectors to reduce emissions without sacrificing operational excellence,” said Lorenzo Simonelli, chairman and CEO of Baker Hughes. “Collaboration is key to making progress toward emissions reductions goals in the energy transition, and we are pleased to be working alongside our long-time customer Woodside to help them further their own climate change strategy to advance their impressive efforts.”

The latest agreement between the two companies comes about a year after Baker Hughes announced a major turbomachinery order for the Pluto Train 2 Project. Bechtel awarded a contract to Baker Hughes to provide high efficiency gas turbines and centrifugal compressors to support the expansion of the Pluto LNG onshore processing facility in Western Australia, which is operated by Woodside.

Pluto Train 2, using Baker Hughes’ proven technology, will be one of the most efficient LNG trains in Australia with an expected capacity of approximately 5 million tons per annum (mtpa). Pluto Train 2 will process natural gas from the nearby offshore Scarborough field, which contains only around 0.1% carbon dioxide. This makes it an attractive option for Woodside’s major LNG customers seeking reliable, affordable and lower-carbon energy to meet demand and support their countries’ decarbonization goals, Baker Hughes said.

Baker Hughes’ scope of supply includes six LM6000PF+ aeroderivative gas turbines and 14 centrifugal compressors for the main refrigerant train, as well as one gas turbine generator in addition to the existing Train 1 power system. The LM6000PF+ turbine is highly-efficient, cost-effective and flexible in operation, maximizing efficiency and helping to lower greenhouse gas emissions.

Pluto LNG is an onshore LNG processing facility located near Karratha in the north-west of Western Australia. First cargo from the single-train facility was delivered in 2012.

Expansion of Pluto LNG will include the construction of Pluto Train 2, associated domestic gas processing facilities, supporting infrastructure and modifications to Pluto Train 1 to allow it to process Scarborough gas. Bechtel has been selected as the EPC contractor for Pluto Train 2 and integration into existing Pluto LNG facilities.

Final investment decisions on Scarborough and Pluto Train 2 Developments were announced by the respective joint ventures on 22 November 2021.