U.S. Appalachian gas production sets record in first half of 2021 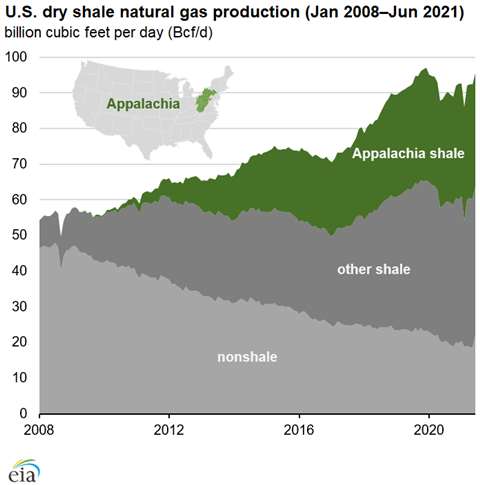 Dry natural gas production from shale formations in the Appalachian Basin averaged 31.9 Bcf/d in the first half of the year, the highest six-month average since the region began producing in 2008, the U.S. Energy Information Administration (EIA) reported.

The Appalachian Basin contains two shale formations, Marcellus and Utica, which accounted for 34% of all U.S. dry natural gas production in 2021. On its own, the Appalachian Basin would have been the third-largest gas producer in the world in 2021, behind Russia and the rest of the United States, the EIA reported.

Pipeline takeaway capacity from Appalachia to Canada and the Southeast has also increased. Recent expansions of pipeline capacity in the Southeast are supporting growth in exports of U.S. liquefied natural gas, in addition to rising consumption in the industrial and power generation sectors, the EIA reported.

Although natural gas pipeline capacity out of the Northeastern United States has grown every year since 2014, the rate of increase has slowed, and recently has not kept pace with growth in regional production, the EIA reported.

The Mountain Valley Pipeline (MVP) is the largest natural gas pipeline currently being constructed in the region, and is targeted to enter service in 2022. The pipeline project is a natural gas pipeline system that spans approximately 303 miles from northwestern West Virginia to southern Virginia – and as an interstate pipeline will be regulated by the Federal Energy Regulatory Commission (FERC).

The pipeline is designed to move 2.0 Bcf/d of natural gas, and is intended to further alleviate pipeline congestion. Pipelines tend to be most full in the region during the late summer when consumption of natural gas within the region is typically at its lowest, the EIA reported.