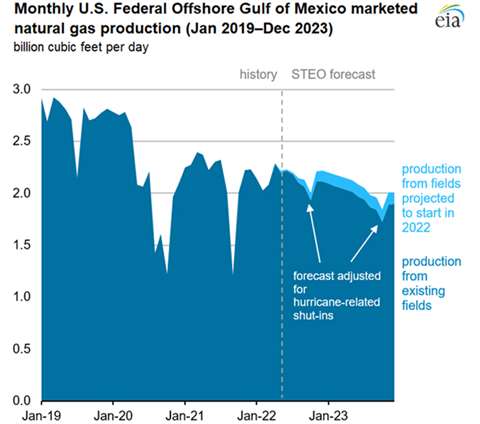 The spot price for natural gas at Henry Hub is expected to average $8.69/MMBtu in 3Q22, up from an average of $8.13/MMBtu in May, according to the latest forecast from the U.S. Energy Information Administration.

Three factors are causing the increase in gas prices: low inventories, steady demand for LNG exports from the U.S. and ongoing demand from power producers in the U.S. who want to switch from coal. Looking further forward, the EIA said it expected spot prices at Henry Hub to average $4.74/MMBtu in 2023 as gas production starts to catch up with the demand.

The EIA also forecast that gas production from the U.S. Gulf of Mexico will decline even as nationwide production is expected to climb. GOM natural gas production will average 2.1 billion cubic feet per day (Bcf/d) in 2023, down from 2.2 Bcf/d in 2022.

As U.S. gas production and exports were climbing, Europe’s imports of LNG rose to an all-time high in April, averaging 16.5 Bcf/d in April. Imports are climbing because inventories are historical lows and its pipeline imports from Russia have fallen dramatically. European spot prices have generally been stronger than in other regions, which has drawn supplies from suppliers who have destination flexibility built into their contracts.

From January through may, LNG imports into the European Union and the United Kingdom averaged 14.9 Bcf/d, up 66% from the same period one year earlier.

LNG import facilities in Southern Europe primarily serve local and regional markets. From January through May, regasified LNG sent to the pipeline grid in Spain, Portugal, and Italy in Southern Europe averaged 4.6 Bcf/d. Those terminals were used about 58% of their capacity, the EIA reported.

Also from January through May, regasification terminals in France, Belgium and the Netherlands averaged 5.8 Bcf/d, a level of imports which exceeded the nameplate capacity of the facilities by 15%.