Norway has emerged as a significant supplier of natural gas to the European Union since Russia’s invasion of Ukraine earlier this year. As Russian gas exports to Europe have declined, Norway has strengthened its importance to the region’s gas supply chain, a recent study has shown.

Earlier this year, the Norwegian government authorized an increase of about 0.14 Bcf/d of natural gas production by the end of the year, primarily from two producing fields. Last year, Norway produced 11.1 Bcf/d of natural gas, making it the third largest exporter of gas in the world, after Russia and the U.S.

On average, Norway exports about 94% of the gas it produces. In 1990, the country exported 92% of the 2.7 Bcf/d it produced. Most of Norway’s natural gas exports are shipped through its extensive export pipeline infrastructure, although smaller volumes are exported as LNG.

In June, Norway reopened its Hammerfest LNG facility, which was closed after a fire in September 2020. The additional production from the facility could enable an increase in natural gas exports of about 0.7 Bcf/d in 2022, according to a recent report from the U.S. Energy Information Administration.

Hammerfest processes natural gas from the nearby Snøhvit field in the Barents Sea. In 2019, the last year the liquefaction facility was fully operational, 5% of Norway’s natural gas exports were shipped as LNG. During normal operations, the facility produces about 6.5 Bcm of natural gas annually, Equinor said.

In addition to Equinor, the operator of the project, Hammerfest partners include TotalEnergies (18%), Petoro (30%), Neptune Energy (12%), and Wintershall DEA (3%.)

In 2021, Norway invested nearly 4%, or $18 billion, of its gross domestic product in crude oil and natural gas extraction and pipeline transportation. 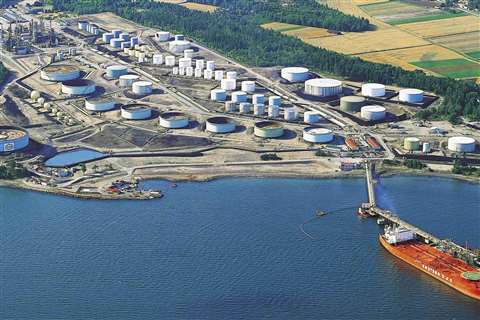