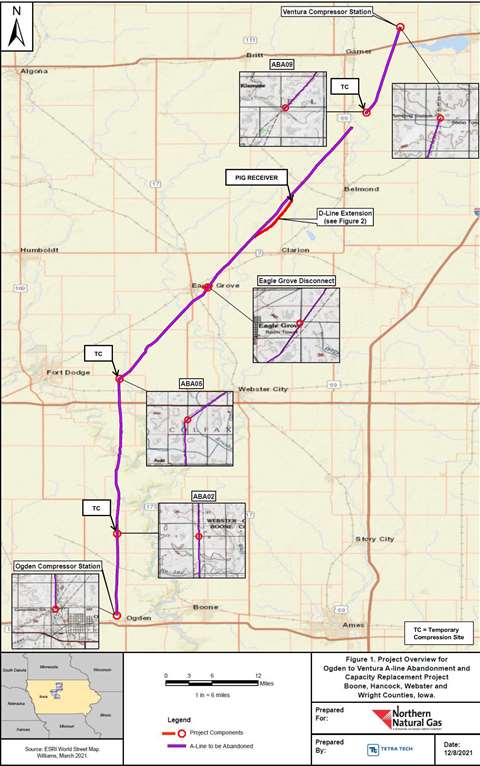 Northern said its system was built in phases, beginning in the 1930s, as system expansions occurred to meet customer requirements. The company operates approximately 14,700 miles of pipeline and 54 compressor stations. Approximately 85% of the pipeline mileage was installed prior to the first enactment of federal pipeline safety standards in 1968, Northern said in a 2020 modernization plan.

The system saw significant expansion facilities made in the in the 1940s, 1950s and 1960s. “While these facilities are still dependable, these facilities have a finite life, and vendor/product support is no longer available for older equipment as equipment manufacturers moved to support newer technology,” Northern stated in a December 2020 draft of its modernization plan.

Northern plans to invest about $1.6 billion over the next 10 years to modernize the pipeline, compression, underground storage and LNG facilities. As part of the modernization plan, Northern, a division of Berkshire Hathaway, plans to spend more than $63 million to abandon in place nearly 83 miles of the 20-inch-diameter A-line (about 71 miles north from the Ogden Compressor Station in Boone County, Iowa. In addition, it wants to abandon nearly 12 miles of line south from the Ventura Compressor Station in Hancock County, Iowa).

The company said its A-line segment pipeline was placed into service in the 1930s and has required increasing maintenance because of its mechanically jointed pipeline segments.

Northern said it has operated the line at reduced pressures to reduce the risk of leaks. It proposes to construct a new line that would replace the capacity lost from the abandonment of the A-line pipeline. Northern plans to complete the project by Nov. 1, 2023, according to the FERC.

Northern plans to transfer the majority of the natural gas currently in the A-line pipeline to the parallel B-line pipeline in the Northern system through temporary compression to draw the pressure in the pipeline down to approximately 50 pounds per square inch, the FERC reported.

Northern said the abandonment of the A-Line, including temporary compression stations, and disconnection at the Ogden and Ventura Compressor Stations and Eagle Grove take-off, would require about eight weeks, the FERC reported.