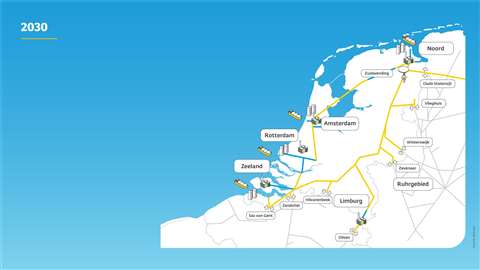 The Dutch plans call for the hydrogen network to be established by 2031. (Image: Gasunie.)

The government of the Netherlands has announced new plans to develop a national transport network for hydrogen. The network will connect ports, large industrial clusters in the country and storage locations for hydrogen. Connections with Germany and Belgium will also be established.

The network will be developed and operated by Gasunie. Dutch Minister for Climate and Energy Rob Jetten also said he would look into whether the company can fulfil the role of offshore grid operator, given the planned growth of hydrogen production in the North Sea.

Around 85% of the national hydrogen network will consist of repurposed natural gas pipelines, which the International Renewable Energy Agency (IRENA) recently estimated could cost 65-94% less than building new hydrogen pipes. The pipelines are expected to become available as less natural gas is transported in the coming years.

Indeed, the Netherlands is preparing to shut down the Groningen gas field in late 2023 or early 2024. This year’s geopolitical developments in Europe, stemming from Russia’s invasion of Ukraine, have prompted the government to push back some of its plans for the field, though. As a result, it is not permanently closing any Groningen wells this year.

The Dutch plans call for the hydrogen network to be established by 2031, with the government providing funding of EUR750mn ($763mn) for its development. Gasunie will target bringing some parts of the network online earlier, by 2026.