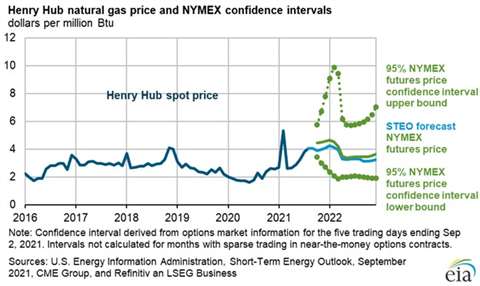 Natural gas spot prices at Henry Hub averaged $4.07/MMBtu in August, up from $3.84/MMBtu one month earlier. The increase was caused by warmer temperatures throughout the U.S., which lead to a greater demand for electrical power fueled by natural gas. Hurricane Ida caused a decline in natural gas production in the U.S. Gulf of Mexico, leading to a further increase in late August.

The spot price for gas in August was $1.77/MMBtu higher than one year earlier. The increase in prices stems from a growth in liquefied natural gas exports, rising domestic natural gas consumptions for sectors outside of the electric power sector and generally flat natural gas production, the EIA reported.

Hurricane Ida pushed more than 90% of natural gas production in the Gulf of Mexico offline in late August, when monthly production fell to 1.9 Bcf/d, down 0.4 Bcf/d from July. The EIA forecast that GOM production will gradually come back to normal in the first half of September and average 1.5 Bcf/d for the month before returning to an average of 2.1 Bcf/d in 4Q21.

The EIA said it expected dry natural gas production to average 92.7 Bcf/d in 2H21, up from 91.7 Bcf/d in 1H21. Looking forward to 2022, production is expected to climb further to 95.4 Bcf/d, as gas and oil prices should remain strong enough to support a growth in production.

Natural gas inventories in the U.S. ended August 2021 at 2.9 Tcf, about 7% lower than the five-year average for this time of year. One reason for the lower inventories is that injections into storage over the summer have been lower than usual – in turn caused by hot summer weather and a surge in exports, the EIA reported.

The agency forecast that U.S. inventories will reach 3.6 Tcf by the end of October (the end of the injection season), about 5% below the five-year average for this time of year.

The EIA’s latest short-term energy outlook assumes that U.S. GDP will grow by 6% in 2021 and by 4.4% in 2022. The agency cautioned that the outlook remains subject to the uncertainty about the ongoing recovery caused by the COVID-19 pandemic. The macroeconomic assumptions in its outlook are based on forecasts by IHS Markit. The forecast assumes continuing economic growth and growing mobility.