These two Frick SGC3511 screw compressor packages with 1750 hp (1305 kW) electric motors were being built c.2013 for gas turbine fuel gas boosting in a power generation application. The SGC series was an adaptation of the workhorse TDSH series with a number of modifications that simplified packaging.

George Frick, an engineering genius born in 1826, was a pioneer in the development of power machinery that eased the labor of men and animals. Having started in Waynesboro, Pennsylvania in 1853, a decade later Frick found himself midway between the crucial Civil War battles of Antietam and Gettysburg. His plant was subjected to numerous Confederate raids and was closed for a month when Waynesboro was occupied by Confederate forces leading up to the Battle of Gettysburg.

But after the War, Frick prospered building steam engines, grain threshers and saw mills. His portable and self-propelled traction engines were among the first in the U.S., and were followed by Corliss steam engines in sizes up to 5000 hp (3729 kW).

In 1882 Frick entered the refrigerating machinery field by building an ammonia compressor cylinder which was mounted on the frame of an existing vertical steam engine. The Frick Company was incorporated in 1883, and George retired in 1886, after 43 years of building up the industrial firm. His motto, “Be sure you are right; then do it quickly!”, defined Frick’s entry into the developing market for refrigeration compressors.

Success of its first ammonia compressors stimulated a demand, and the Frick Company in the mid-1880s developed an entire line of large refrigerating machines, driven by the new Frick Corliss steam engines. In 1896, Frick built the largest refrigerating machine in the world. The 30 ft. (9.14 m) tall giant measured 50 ft. (15.2 m) long, requiring a train of 15 cars to ship it in pieces from Waynesboro to Armour in Kansas City, Missouri. By the late 1890s, Frick anticipated a demand for smaller sizes, with lighter parts running at higher speeds, for moderate capacity refrigerating systems to serve hotels, restaurants, hospitals and various industrial plants. As steam power was not always available, other methods of driving the compressors were introduced.

The heavy slow-speed horizontal compressors were superseded by Type J machines, which were adapted to direct synchronous motor drive. Vertical enclosed-type CO2 machines were also developed, but were soon replaced by Freon-12 compressors in the early 1930s. Frick low-pressure refrigerating units and heavier machines were produced by the tens of thousands. In the succeeding years Frick played a leading part in many types of commercial, industrial and building refrigerating and cooling systems, extending its line to include a 9-cylinder compressor.

However, just as internal combustion engines displaced Frick’s steam engine business in the early part of the twentieth century, a new compressor technology emerged that would soon threaten Frick’s leadership position in refrigeration. By 1964, Swedish company SRM had developed a version of their patented rotary screw compressor specifically for refrigeration applications, and by the end of the 1960s, several SRM licensees had produced more than 1000 refrigeration screw compressors.

The Frick NGC series was first introduced in 2001 with internal gears designed to match engine speeds for field gas applications.

Finally, in 1980, Frick obtained an SRM license, and set out to develop its own screw compressors. To counter competition from other companies already manufacturing screws, Frick developed some important differentiating features that could only be characterized as “radical ideas” at the time. Frick was also the first to build all of its screw compressors with anti-friction bearings, which allowed the vast majority of its machines to be applied without oil pumps. But the most revolutionary feature revealed on the first Frick rotary screw compressor in 1982 was the inclusion of two slides in the compressor housing that could be moved axially along the rotor mesh to provided step-less control of both the capacity and the volume index (Vi). Matching the Vi to the system pressure ratio eliminated the power penalties associated with typical screw compressor under- or over-compression. To further leverage this competitive advantage, Frick developed a PC-based control system that automatically adjusted the hydraulically actuated slide valves to optimize performance as operating conditions changed.

In the mid-1990’s, faced with a static business climate in the industrial refrigeration compressor business, Frick began looking for other applications for its successful screw compressor product line. This led to Frick screw compressors being supplied in factory-packaged systems for refrigeration applications in chemical and petrochemical, oil and gas processing, industrial gas production, oil and gas transportation and storage, and other applications. But aiming at the growing market demand for screw compressors for gas gathering, gas processing, fuel gas boosting and vapor recovery applications, Frick also started a program of developing OEMs to package compression systems that incorporated Frick rotary screw compressors. Frick was deliberate and selective in choosing proven packagers for its compressors, in order to ensure success and to provide packagers a franchise.

The unique features of Frick’s screw compressors were also advantages in the gas patch. In particular, the two slide arrangement with Frick’s control system was perfect for declining well pressure, as it could chase the well pressure down and keep the unit loaded. Anti-friction bearings were also an advantage as they could operate at higher temperatures than fluid film bearings, allowing operators to keep the process gas above the dew point temperature. The Frick control system, together with appropriate package design, helped keep water in gaseous form and enabled standard Frick machines to compress wet gases containing CO2 and H2S. 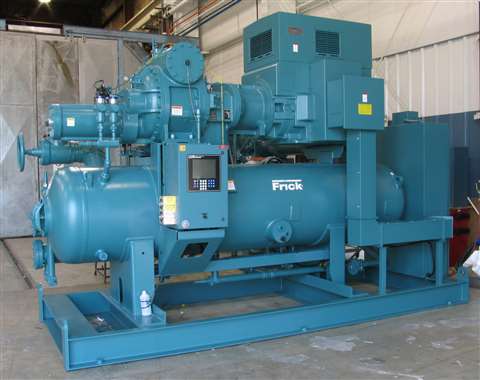 Over time, Frick developed its own rotor profiles, tailored to gas type, which helped to limit pulsations and noise, while optimizing performance. Pressure ratings of some models were increased to 600 to 700 psig (41.4 to 48.3 bar), much higher than the original refrigeration compressor ratings, and some models were rated as high as 900 to 1200 psig (62.1 to 82.7 bar) for special applications.

Frick screw compressors continued to evolve for more than three decades after the first model was introduced. By 2013, a complete line encompassed 86 unique models with rated power ranging from 50 to 6000 hp (37 to 4474 kW) and with both internally geared and direct drive offerings.

More than 130,000 Frick screw compressors have been produced since introducing the line in 1982, operating with about 100 different gasses, including over 12,000 compressors in natural gas applications. Frick became part of York International c. 1986, which was subsequently acquired by Johnson Controls, Inc. in 2005.

Frick screw compressors continued to evolve for more than three decades after the first model was introduced in 1982. By 2013, a complete line encompassed 86 unique models with rated power ranging from 50 to 6000 hp (37 to 4474 kW) and with both internally geared and direct drive offerings.