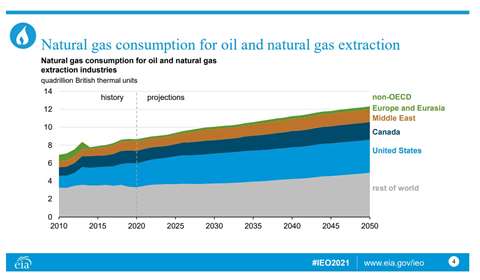 The ongoing demand for gas and the expected expansion of processing and transportation infrastructure worldwide will lead to greater production worldwide, according to the study.

A demand from industrial users for both natural gas and their liquids also support the expected growth in production. The world’s economy will see growth in consumption among electric power producers, transportation and residential and commercial sectors, but that growth is more limited than the industrial sector, the study predicted.

Meanwhile, the rise of renewables over the next three decades means that the share of natural gas in the total of energy consumed will decrease from 24% to 22% over the same period. Lower prices for gas, relative to other sources, in the near term and the need to provide a back-up supply to intermittent renewables are important drivers in world gas consumption, according to the study.

The study, known as the International Energy Outlook 2021, is an annual forecast the agency uses to make predictions about the world energy industry. The use of renewables is expected to grow because of falling technology costs and changing government policies, which will encourage worldwide electric power producers to use renewable energy to generate electricity.

The study forecast that electric power producers will increase their consumption of gas 30% from 2010 to 2020, but that growth will likely plateau in 2030. Some of the expected growth in gas production through 2030 will come from oil production, which brings with it some amount of associated gas.

Russia is expected to show the most growth in next exports, which will double to 14 Tcf over the projection period to remain the largest net exporter of natural gas through 2050. Because of Russia’s proximity to Europe, China and non-OECD Asia, its exports will grow through pipelines and established LNG exports.

In the U.S., the growth of LNG terminals and transportation ships will mean that its net exports of gas will reach overseas markets where there is the highest demand, according to the EIA forecast.

Imports of gas into non-OECD Asia, China and India should triple by 2050 as supplies arrive through pipeline from Russia and LNG exports from the U.S., the Middle East, Australia and eventually Africa.

Renewables will be the primary source of new electricity generation, but natural gas, coal and batteries will be utilized to meet and support grid reliability.

If current policy and technology trends continue, global energy consumption and energy-related CO2 emissions will increase through 2050 because of population and economic growth, the study forecast.