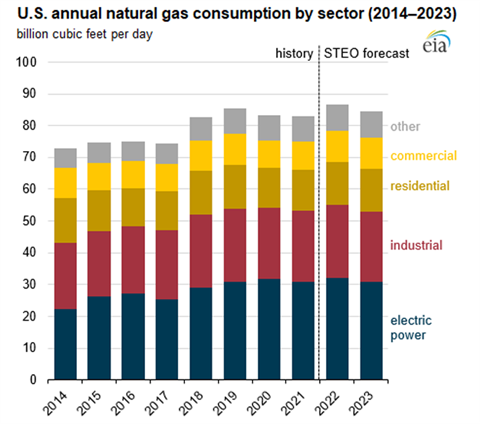 The agency’s most recent Short-Term Energy Outlook has predicted that consumption will increase in all end-use sectors, led by the electric power sector and residential and commercial sectors.

“In the electric power sector—the sector that consumes the most natural gas—annual U.S. consumption of natural gas increases by 1.2 Bcf/d in 2022 to average 32.1 Bcf/d, which is 0.3 Bcf/d greater than the previous annual record high of 31.8 Bcf/d set in 2020,” the report states.

The increase in demand comes despite a large increase in natural gas prices this year. Within the electric power sector, consumption of natural gas in the first eight months of the year has averaged 33.2 Bcf/d, up 2.0 Bcf/d from the same period one year ago.

The roughly 6% increase in consumption has come despite an average price of $6.56/MMBtu in the same eight-month period, up from $3.43/MMBtu for all of 2021.

The consumption of natural gas in the electric power sector has increased because of limitations at coal-fired power plants and weather-driven demand. Coal-fired power plants have limited ability to increase power generation because of historically low on-site deliveries, constraints in fuel delivery and the ongoing retirement of coal capacity, the EIA has reported.

Natural gas was key to meeting electricity demand throughout the country despite a cold January and a hot summer, but that may shift in the last part of 2022, the EIA reported

“We expect natural gas consumption in the electric power sector to decline in the fourth quarter of 2022 and in 2023, in part, due to more renewable electricity generation capacity coming online,” the EIA reported.

“January 2022 was particularly cold, resulting in 9% more heating degree days (HDD) compared with the previous 10-year (2012–2021) average. Natural gas consumption in these two sectors averaged 8% higher than the five-year (2017–2021) average in January, averaging 31.0 Bcf/d in the residential sector and 17.8 Bcf/d in the commercial sector,”. the EIA reported.

Looking ahead to 2023, the agency said it expected natural gas consumption in the residential and commercial sectors to be similar to 2022 levels.

The growth in U.S. gas consumption has occurred along with a steady increase in natural gas rigs. Producers are now operating more drilling rigs than at the beginning of the COVID-19 pandemic in early 2020. Before the pandemic, the number of operating rigs was generally falling.

As the number of gas rigs increases, the EIA has forecast that U.S. production will also climb. Dry natural gas production averaged 97.6 Bcf/d in August 2022, a number that should steadily increase to 100.5 Bcf/d by December 2023, according to the latest EIA forecast.