A Reuters file photo shows part of a hybrid power plant near the town of Schenkenberg north of Berlin. (Photo: Reuters.)

The test will be one of the first cases where hydrogen is tested for use to reduce the carbon footprint of an existing gas-fueled power plant delivered by Wärtsilä. The 55 MW plant currently operates with three Wärtsilä 50SG engines running on natural gas. The parties will aim for testing fuel blends of up to 25% by volume hydrogen mixed with natural gas.

The Wärtsilä engines can operate with this level of hydrogen blended with gas with little to no modification needed. Though Wärtsilä engines can be operated on even higher hydrogen-blend levels, these tests will be restricted to the limit of 25% hydrogen for natural gas systems, according to the international equipment standard IEC/EN 60079-20-1, Wärtsilä said.

“These hydrogen tests reinforce the viability of the internal combustion engine as a future-proof technology that plays a key role in decarbonizing the power industry. We have long had a focus on creating solutions that enable zero-carbon power generation, and are excited to begin this hydrogen testing project in the USA as a natural next step in developing our products to meet customer needs for a decarbonized future. Our engines already have the flexibility for both balancing the input of renewables into the power system, and baseload generation with a continuously increasing range of fuels,” said Jon Rodriguez, director, engine power plants, Wärtsilä North America.

One engine will be selected for the test program, during which time it will continue to deliver power to the grid. For defined engine load levels, the hydrogen content within the fuel will be gradually increased to a maximum of 25% by volume.

Measurements of the engine’s performance will be made throughout the testing. Wärtsilä has already successfully carried out engine tests at its testing facilities in Vaasa, Finland and Bermeo, Spain, to assess the optimum engine parameters for operating with hydrogen fuel. 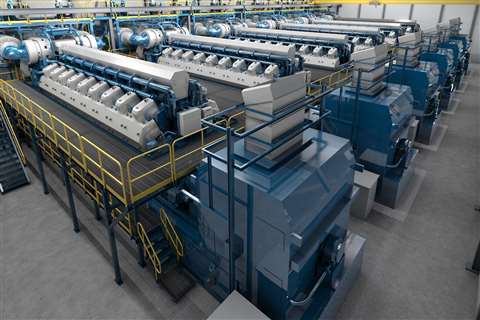