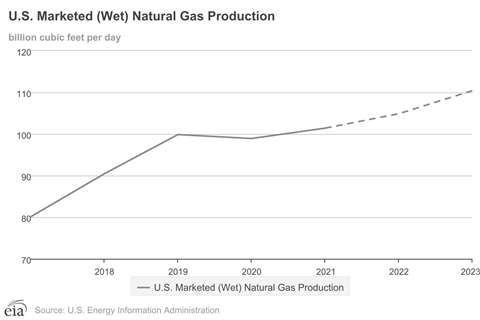 Natural gas prices rose in April and are expected to climb further in the coming months in response to sustained international demand, according to a recent study from the U.S. Energy Information Administration.

“We expect the Henry Hub price to average $7.83/MMBtu in 2Q22 and average $8.59/MMBtu in 2H22. High forecast natural gas prices reflect our expectation that natural gas storage levels will remain less than the five-year (2017–2021) average this summer,” the agency reported. .

The agency warned that the war in Ukraine makes its outlook more uncertain. “The May Short-Term Energy Outlook (STEO) is subject to heightened levels of uncertainty resulting from a variety of factors, including Russia’s full-scale invasion of Ukraine,” the agency wrote.

The most recent outlook assumes U.S. GDP will grow by 3.1% in both 2022 and 2023, following growth of 5.7% in 2021. Major factors driving energy supply uncertainty include how sanctions affect Russia’s oil production, the production decisions of OPEC+, and the rate at which U.S. oil and natural gas producers increase drilling.

“Natural gas prices could rise significantly above forecast levels if summer temperatures are hotter than assumed in this forecast and electricity demand is higher. In addition, we expect that U.S. liquefied natural gas exports (LNG) will remain high during the summer. We expect the Henry Hub spot price will average $4.74/MMBtu in 2023. The forecast drop in prices for 2023 reflects our expectation that the rate of natural gas production will increase next year while LNG export and demand growth slow, contributing to higher storage levels in 2023 than in 2022,” the agency reported.

The agency has forecast that natural gas inventories to increase by 418 Bcf in May, ending the month at 2.0 Tcf, which would be 14% below the five-year average for this time of year. Looking further ahead, the agency predicted natural gas inventories will end the 2022 injection season (end of October) at almost 3.4 Tcf, which is 9% below the five-year average.

In April, U.S. LNG exports averaged 11.6 billion cubic feet per day (Bcf/d), slightly below an all-time peak of almost 12.0 Bcf/d set in March. The agency lowered its forecast for U.S. LNG exports, which will average 12.1 Bcf/d from May through August. The latest forecast reflects the agency’s assumption of slightly lower LNG demand in Asia and Europe this summer compared with its previous forecast.

U.S. LNG exports for the entire year are expected to average 12.0 Bcf/d, up 23% increase from 2021. Growth in LNG exports in recent years has been driven by capacity expansions, but the agency does not expect any new export facilities to come online in its current forecast period. As a result, forecast growth in LNG exports has slowed to 5% in 2023, with LNG exports averaging 12.6 Bcf/d for the year.

The agency has predicted U.S. consumption of natural gas will average 85.7 Bcf/d in 2022, up 3% from 2021. The increase in U.S. natural gas consumption is a result of colder temperatures and related higher consumption in the residential and commercial sectors in 2022 compared with 2021.

In addition, the EIA has expected the industrial sector to consume more natural gas in 2022 in response to expanding economic activity. The forecast natural gas consumption from electric power producers should increase in 2022 because of limited natural gas-to-coal switching despite high natural gas prices.

For 2023, the EIA has forecast natural gas consumption will average 85.3 Bcf/d, down 1%, mostly as a result of assumed milder winter temperatures.

Dry natural gas production in April averaged 95.5 Bcf/d in the U.S., up 0.4 Bcf/d from March. Although April production was lower than the ost recent peak in December, it has climbed over the last two months, the EIA reported.