Turboexpanders are key components to the energy transition 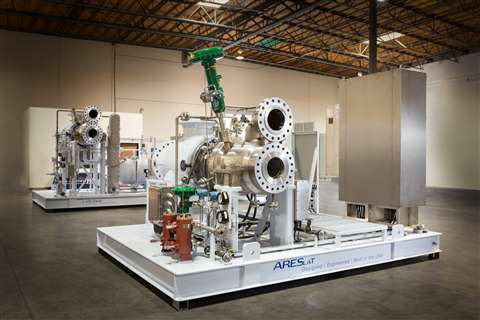 With the energy sector looking to decarbonize, the transition away from hydrocarbons is underway with hydrogen taking center stage in many of the industry’s roadmaps. Georgia-based Chart Industries (NYSE: GTLS) has responded to this interest by bolstering its offering of products and technologies that enable the industry to move away from hydrocarbons and toward clean energy solutions.

As part of that effort, Chart acquired L.A. Turbine (LAT) in 3Q21 for about $80 million in cash. LAT is a turboexpander design, engineering, manufacturing and assembly company of new and aftermarket equipment, with significant in-house engineering expertise. With the addition of LAT, Chart is able to offer customers a “one-stop shop” solution and more options within what they refer to as the “Nexus of Clean”—clean power, clean water, clean food and clean industrials. This includes technology equipment for a variety of applications used in hydrogen and helium liquefaction, carbon capture and energy storage, industrial gas, natural gas processing, small-scale LNG plants and heavy hydrocarbon removal at LNG plants.

Chart purchased LAT because of their capability to manufacture unique expanders required for hydrogen and helium liquefaction, and due to LAT’s vertical integration, Chart is further differentiated by the ability to execute faster on new expander product developments and standard expander manufacturing, resulting in greater control over delivery timeframes. There is a high degree of fit between the high specification engineering of both LAT and Chart, which is already yielding positive results in increasing the size of hydrogen liquefaction plant capacities and improving plant efficiencies.

“These very specialized expanders are difficult to design and produce as they require very high speed and efficiency, and in some cases, must be oil-free machines with gas foil bearings for smaller plants, and for larger plants, be equipped with magnetic bearings,” said Chart CEO Jill Evanko.

The emergence of hydrogen as an alternative to hydrocarbons has created a range of opportunities for companies like Chart that produce equipment throughout the hydrogen value chain. Chart has designed and manufactured hydrogen equipment for more than 57 years. Chart does not produce or own the hydrogen molecule. Rather it has applied its cryogenic expertise to develop a complete solution to enable customers to take full advantage of the hydrogen value chain from liquefaction, storage, distribution, and end use fueling applications.

Interestingly, while many of the technologies required to develop hydrogen at scale are in development, Chart has been providing hydrogen liquefaction, storage, vaporization and distribution systems since the 1960s with a client list that includes the world’s leading industrial gas companies and space exploration organizations.

Through advancements in fuel cell stack technologies and continued cost reductions, hydrogen can be used as an energy carrier to fulfill several roles in the energy sector. With the ability to store renewable power, produce electricity, and power light and heavy-duty vehicles with zero tailpipe emissions, hydrogen becomes a potential global energy source at scale.

In addition to the purchase of LAT, Chart purchased an engineering company, Cryo Technologies in 1Q21, whose deep cryogenic system design expertise enhances its ability to offer hydrogen and helium system solutions.

A quick look at Chart’s CV shows the company continues to be a prime mover in natural gas, the cleanest burning fossil fuel, and one that is often described as the bridge fuel towards an eventual hydrogen solution. LNG is not going away. Rather, it is going to be a part of the overall hybrid solution, and to get there, Chart is leveraging its LNG expertise by applying many of the same technologies used to produce, store and transport liquefied natural gas to hydrogen. The LNG supply chain provides a model for the hydrogen supply chain and uses many of the same concepts for hydrogen liquefaction, storage and transportation.

Like methane, hydrogen is a gas, but its unique characteristics pose a few challenges for end users and processors. Being a much smaller molecule, hydrogen’s volumetric density is low compared to LNG, which requires more and large volumes of storage tanks. Plus, the colder temperatures required to liquefy hydrogen (-252.8 deg C), compared with natural gas which liquefies at -162 deg C, pose the risk of liquefying air and generating oxygen-rich condensates.

Although the two gases boil at different rates, both LNG and liquid hydrogen are stored and transported in insulated vessels. Chart makes equipment to move hydrogen by transport trailer, ISO container, rail car or marine transport.

Currently the U.S. has the capability to produce around 10 MM tonnes per annum of hydrogen. The vast majority of this is via steam methane reformation of natural gas. A by-product of this process is carbon dioxide, and hydrogen produced via this method is known as grey hydrogen. Clearly, as the principal purpose of adopting hydrogen is to reduce carbon emissions, producing hydrogen via alternative methods and/or capturing the CO2 is a further important step towards net zero CO2. This gives rise to a kaleidoscope of colors used to describe the hydrogen produced; the common ones are:

Blue hydrogen: Produced when carbon dioxide from the grey hydrogen process is captured and either stored or, as in the case of Chart’s Cryogenic Carbon Capture™ process, returned as a liquid for re-use and/or sale

Green hydrogen: Produced without harmful emissions where electricity from surplus renewable sources, such as wind or solar, is used to electrolyse water

Regardless of how it is produced, hydrogen gas is the same molecule and can be liquefied, transported, stored, compressed, vaporized, mixed and used without any changes to the associated equipment and processes. Also, Chart is not only molecule agnostic, meaning the company’s solution handles a variety of molecules, their capabilities work with all of the “colors of hydrogen.”

The energy industry has never committed more than it has now to a diverse range of energy products and a long-term reduction in hydrocarbons. Chart is a major contributor and influencer in the development, design and manufacture of hydrogen based and other clean energy solutions. Every day brings new announcements and advancements in companies’ abilities to contribute to the clean energy transition through the newest energy candidate, hydrogen. The companies who are able to develop the infrastructure used to store, transport, liquefy and re-gasify hydrogen, and other alternatives, will have a promising future in the new energy economy. 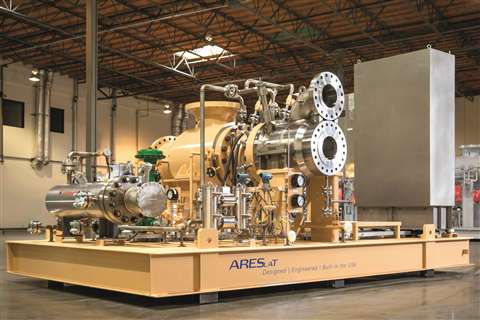 Chart Industries acquires L.A. Turbine
Acquisition of LAT is the latest in a series of additions to Chart’s portfolio