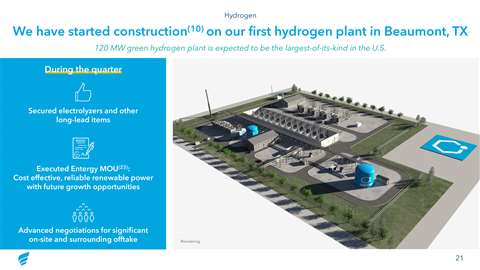 LNG infrastructure company New Fortress Energy said it plans to have its latest floating LNG unit completed in March 2023 and to start operations by the middle of the year.

The company’s newest LNG liquefaction terminals will be based in Altamira Mexico, and after that, offshore Grand Isle, Louisiana. New Fortress has signed supply agreements with Mexico’s state CFE, which will start in the middle of 2023.

The company announced it would deploy multiple units at Altamira to create a hub, which will use some of the gas from the Sur de Texas-Tuxpan pipeline, which runs from South Texas to Mexico’s Gulf Coast.

The company has five Fast LNG units under development, which will add about 7 million tonnes per annum (mtpa) of liquefaction capacity by the end of 2024, for a total LNG supply portfolio of about 9.5 mtpa.

Its Fast LNG liquefaction facilities are designed to be cheaper and quicker to deploy than conventional liquefaction projects. Each unit will be comprised of modular liquefaction and processing equipment, which are placed on fixed platforms, jack up rigs or semi-submersible rigs that will be installed offshore in shallow or deep water.

Fast LNG units can act as tolling facilities in cases where they are not the offtaker of the LNG or as manufacturing facilities, the company said.

In addition, the company has started construction of its first hydrogen plant in Beaumont Texas, which will ultimately produce 120 MW (~50 tpd.)

The company has a fleet of about 20 vessels, some of which it operates and some of which are chartered in from third parties. It operates seven regasification units (FSRUs) and eleven liquefied natural gas carriers.

Some of these vessels are currently under third-party charter agreements. As those agreements expire, it plans to employ the vessels internally to support its existing facilities and international project pipeline.

The company has an LNG storage and regasification in the port of Montego Bay, which started operations in October 2016. The Montego Bay Facility is capable of processing up to 740,000 gallons of LNG (61,000 MMBtu) per day and features approximately 7,000 cubic meters of onsite storage.

During a recent earnings call with investor, New Fortress Energy said it expects the global LNG market to remain undersupplied over the next two years, in part because demand from Asia will rebound as Europe looks for alternative to Russian gas.

New Fortress Energy is also building a gas receiving terminal and power plant in northern Brazil and an offshore LNG terminal in southern Brazil to serve power producers by 2023.