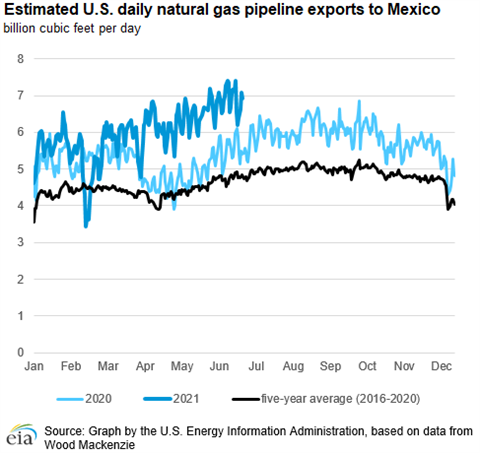 U.S. natural gas exports to Mexico exceeded 7 Bcf/d on several days in June and reached a record high for the month of 7.4 Bcf/d on June 24, according to a report released recently from the U.S. Energy Information Administration. The agency, using data from Wood Mackenzie, said the average for the month was 6.9 Bcf/d, up 25% from June 2020 and up 44% for the five-year average for that time of year.

Exports to Mexico rose in response to additional demand for gas from power producers, higher temperatures and greater demand from industry, the EIA reported.

Pipeline exports to Mexico are the largest single component of the U.S. natural gas trade and account for 40% of all gas exports in 2019. The completion of the southern-most segment of the Wahalajara pipeline system in June 2020 led to a surge of additional exports. The Wahalajara system provides U.S. gas to meet additional demand from Mexico’s electric power and industrial sectors.

The Sur de Texas-Tuxpan Pipeline more than doubled flows from about 0.8 Bcf/d in June 2020 to an estimated 1.7 Bcf/d a year later. The increased volume has been facilitated by recently expanded domestic pipeline connections and expansions of existing pipeline infrastructure in Mexico. The expanded infrastructure has allowed more natural gas to flow to power plants in the Mexico City region and to Mérida markets in the Yucatán Peninsula.

The Wahalajara pipeline system, which connects the Waha Hub in West Texas to Guadalajara and other population centers in West-Central Mexico, has had increased flows coming from the Trans-Pecos Pipeline from about 0.2 Bcf/d in June 2020 to about 0.8 Bcf/d in June 2021, the EIA reported.

Some of the increase on the Wahalajara pipeline system is from the increased flow capacity on the Villa de Reyes-Aguascalientes-Guadalajara Pipeline (VAG) in Central Mexico and subsequent delivery points that entered service upon its completion in October 2020.

With increased access to natural gas imports, Mexico has increased its use of natural gas to generate electricity. Seasonally high temperatures in areas of northern and central Mexico during parts of June increased demand for electricity.