The joint initiative between Equinor and Fluxys plans to complete the CO2 infrastructure project and have it ready for commissioning before the end of this decade. The offshore pipeline is planned to have a transport capacity of 20 to 40 million tonnes of CO2 per annum. (Map: Equinor.)

Norway’s Equinor and Belgium’s Fluxys have agreed to develop a pipeline for transporting carbon dioxide (CO2) to storage sites in the North Sea. The project will connect Belgium and Norway, and will offer open access to emitters in Belgium and surrounding countries that wish to access offshore CO2 storage capacity.

The project will include a 1000 km (621-mile) CO2 export trunkline operated by Equinor, connecting an onshore CO2 transmission infrastructure built and operated by Fluxys in Zeebrugge to the Norwegian continental shelf. The pipeline would have a capacity of 20-40mn tonnes/year of CO2.

According to the companies’ announcement, liquefied CO2 shipped from neighboring hubs could also be connected to the Zeebrugge facility, further expanding the project’s reach.

The scheme is currently in the feasibility stage, with the partners aiming for a final investment decision (FID) by 2025. The project would then be ready for commissioning by the end of the decade. 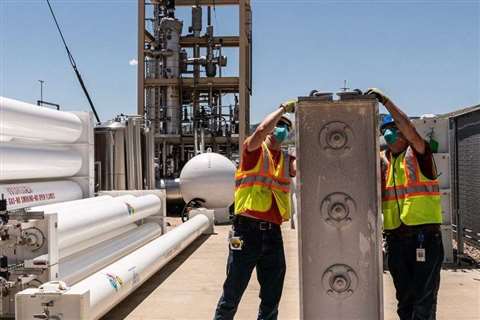