The Flex-Op arrangement allows individual compressors to run in series, in parallel, or both. (Image: Elliott Group)

The technology, known as Flex-Op compressor arrangement, allows for improved reliability and accessibility to the rotating components, and incorporates Elliott’s nearly 70 years of proven expertise for hydrogen compression, the company said.

In the Flex-Op arrangement, individual compressors can be run in series or in parallel, or both. This is achieved with three to four centrifugal compressors arranged about a single multi-pinion gearbox.

Each rotor is connected to its own pinion via a flexible shaft coupled to the central gear, which means the rotor speeds can be individually optimized for highest aerodynamic efficiency.

Elliott’s barrel casing configuration, coupled with the single multi-pinion gearbox, allows the entire assembly to be powered by a motor with a variable frequency drive (VFD) or a motor in conjunction with a variable speed drive (VSD) for speed control.

The Flex-Op arrangement has many advantages over reciprocating or high-speed centrifugal compressors, Elliott said. It uses standard Elliott designed compressors and impellers, and is compact and easy to maintain and repair.

It can engage or disengage individual compressors, switch between series and parallel operation, and run each compressor at different speeds. Most importantly, for pure hydrogen compression, the process gas is safe from risk of oil contamination.

The Flex-Op design is not limited to hydrogen applications, but is also suitable for energy storage and other process compression and refining applications. 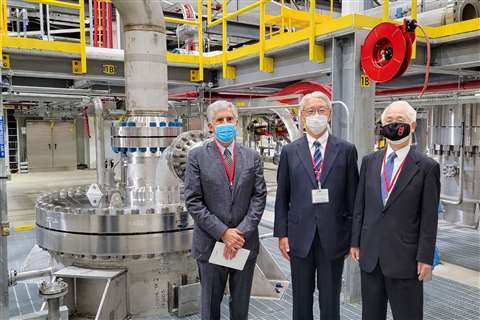