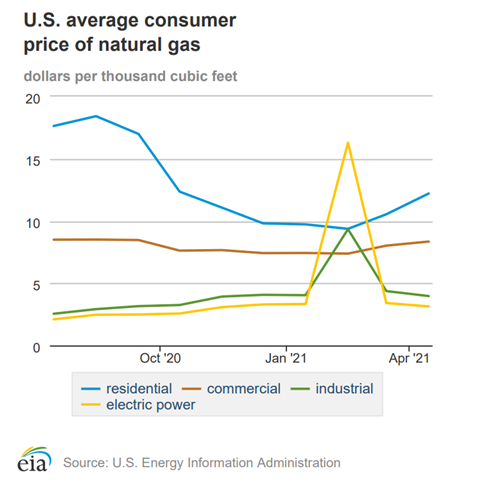 U.S. dry natural gas production fell in April when compared with production from a year earlier, according to a recent report from the Energy Information Administration.

Even as dry production fell, gross withdrawals reached 113.2 Bcf/d, up 0.7% from a year ago. This was the highest for the month since the EIA began tracking the data in 1980. Meanwhile, marketed production, which includes gross withdrawals less gas used for repressuring and flaring and non hydrocarbon gases removed in treating, reached 100.4 Bcf/d, up from 100.1 Bcf/d a year ago.

Total gas consumption in April was 74.8 Bcf/d, essentially flat when compared to a year ago. Total consumption was the third-highest for the month since the EIA began using the current definitions for each consuming sectors in 2001. When broken down by sector, consumption in residential and electic power sectors fell while commercial and industrial deliveries rose.

Net gas exports, which includes exports less imports were 11.7 Bcf/d in April, the highest for any month since the EIA began tracking imports and exports in 1973. The U.S. exported 2.7 times more natural gas than it imported in April.