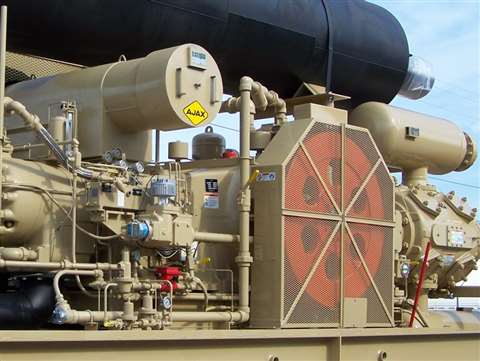 Cooper selected the AJAX 2802 engine because of the similarities of its combustion system to that of the large fleet of the other engine brands the company services, including Clark, Cooper-Bessemer, Ingersoll Rand, and Worthington. (Photo: Cooper Machinery Services.)

Cooper Machinery Services has expanded the use of hydrogen and natural gas blended fuel in a slow-speed integral engine. In recent tests, the company successfully tested a fuel blend of 30% hydrogen and 70% natural gas by volume, a process which enabled significant reductions in emissions.

The most recent tests, conducted in collaboration with a major natural gas pipeline company, come about 10 months after it successfully tested a blend of 5% hydrogen and 95% natural gas. The increased use of hydrogen enables the company significant reductions in emissions of methane, carbon monoxide, carbon dioxide and THC. The tests are designed to demonstrate the safe operating range of H2 blends in large-bore internal combustion engines, Cooper said.

“Cooper’s hydrogen development has progressed beyond expectations. Traditional thinking was that engines in our industry could potentially operate with a hydrogen blend containing up to 15% H2. To achieve 30% in a slow-speed integral engine-compressor with a corresponding reduction in methane is a major achievement for Cooper and the industry overall,” said Cooper CEO John Sargent.

The Cooper test was conducted at their slow-speed integral engine test cell at corporate headquarters located in Houston, Texas. The test engine is a Cleanburn Plus two-stroke AJAX 2802 with 15” piston bore, 16” power stroke, and a speed range of 360-440 RPM. Cooper selected the AJAX engine due to the similarities of its combustion system to that of the large fleet of the other engine brands the company services (Clark, Cooper-Bessemer, Ingersoll Rand, and Worthington.)

Cooper is a portfolio company of Arcline Investment Management. 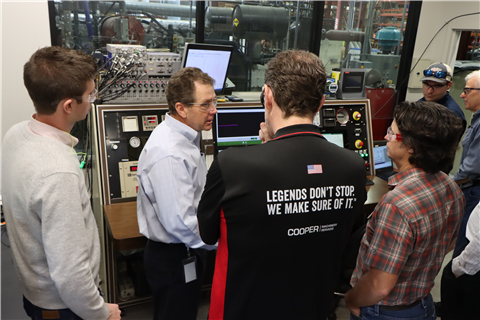