Cheniere to sell 1 mtpa of LNG to Thailand’s PTT 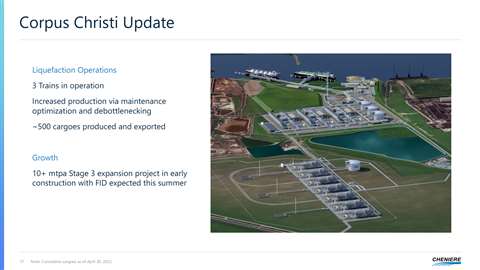 Cheniere Energy plans to sell LNG to a subsidiary of Thailand’s state-held petroleum company, PTT. Under terms of the agreement between the two companies, PTT Global LNG will buy 1 million tonnes per annum (mtpa) from Cheniere’s liquefaction plant in Corpus Christi, Texas starting in 2026.

The 20-year agreement between the two companies calls for a combination of free-on-board (FOB) and delivered ex-ship (DES) deliveries. This customized structure represents a further evolution in Cheniere’s commercial offerings tailored to the specific needs of LNG customers around the world, Cheniere said.

The purchase price for LNG under the agreement is indexed to the Henry Hub price, plus a fixed liquefaction fee.

“This is the first direct LNG contract from a US LNG producer for PTTGL, and this agreement not only reflects the critical need for long-term, reliable LNG supply across the globe, but also the important role LNG has to play in powering growing economies for decades to come,” said Jack Fusco, Cheniere’s president and CEO.

“LNG or gas is a major transition fuel which supports both energy security and sustainability. Our ambition is to move forward with the future energy while ensuring energy security,”said Auttapol Rerkpiboon, PTT’s President and Chief Executive Officer. “We actively engage in the LNG business and target to be a Global LNG Player by managing an LNG portfolio of 9 mtpa by 2030. By the end of this year, PTT’s LNG receiving terminals will be able to accommodate regasification capacity up to 19 million tons per year with our new terminal.”

Cheniere Energy is the largest producer and exporter of liquefied natural gas (LNG) in the United States.