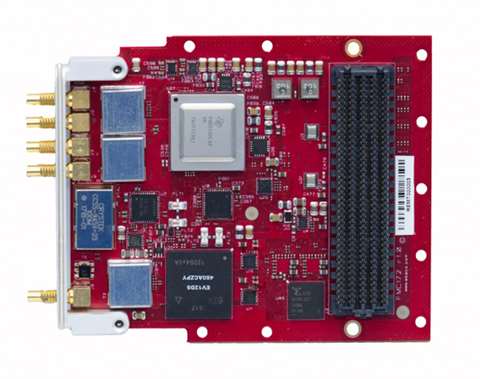 The Abaco FMC172 wideband low latency FMC module is based on the latest high performance ADC device from Texas Instruments and DAC devices from Teledyne-E2V.

Abaco Systems has been granted a $1.2 million contract to support the construction of an overland natural gas pipeline extending over 100 miles through several countries in western Asia. The company will install its FMC172 wideband low-latency FPGA Mezzanine Card (FMC), which is used as a high-sampling rate analog to digital converter (ADC), to detect leaks and prevent damage from tampering, theft or economic  failure.

The pipeline has a fiber cable running end-to-end to act as an acoustic disturbance sensor. A known waveform is applied to the sensor cable and physical changes to the pipeline structure are detected as disturbances in the reference signal. At multiple points throughout the system, the FMC172 converts the received waveform to a digital signal that is fed into the evaluation system to factor out white noise and apply mathematical algorithms that interpret the signal to determine the source and location of the abnormality.

Abaco said it was chosen based on the FMC172’s innovative technology, as well as the company’s ability to provide smooth upgrades and flexibility in scheduling for early test units. The company was able to deliver early units on a compressed schedule, which made the card a frontrunner for the design win. By providing local support over the long development period, Abaco said it displayed its commitment to help the operator meet its goals to improve safety, asset availability, and sustainability.

The FMC172 is a high-speed, low-latency ADC/DAC digital signal processor providing a commercial off the shelf solution in a small form factor. It is ideal for advanced Digital RF Memory (DRFM) systems with over 6.0 GHz bandwidth and an adjustable sampling frequency up to 6,400 GSPS.

Pete Thompson, VP of product management for Abaco Systems, said, “Abaco’s ability to put technology to work in a way that lends itself to our customers success means we could deliver a product which would meet the customer’s critical needs for high tech. This design win utilized a unique set of partner-customers including academia, industry, and government to alleviate future threats to the environment, economy and overall costs of the project.”

Abaco Systems is a subsidiary of Ametek, a global manufacturer of electronic instruments and electromechanical devices