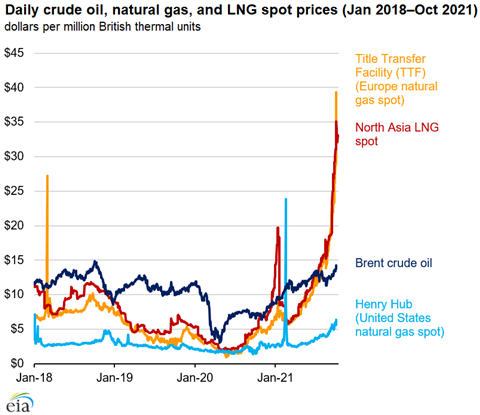 International natural gas price benchmarks in Europe and Asia hit record highs this year, in some cases making a twenty-fold increase from record lows seen in the summer of 2020, according to data from Bloomberg Finance.

Prices for gas have reached $35/MMBtu in Asia and nearly $40/MMBtu in Europe in response to a surge in demand in Asia and Latin America and low gas inventories in Europe. Worldwide supplies of liquefied natural gas are limited in part because of planned and unplanned outages at LNG export facilities in several countries, the U.S. Energy Information Administration reported.

Global spot LNG prices have risen in part to a surge in demand for gas in Asia, primarily China. In North Asia, colder than normal winter and a hot summer led to higher natural gas demand and a decline in inventories and a surge in imports. LNG exports to Asia also rose in response to a shortage of coal in China, an increase in demand from power and industrial sectors in Japan and a decline in production from nuclear power plants in Korea, the EIA reported. 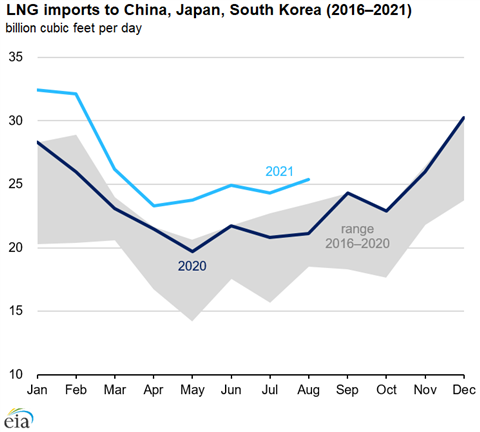 As Asia demand surges, low supplies in Europe have pushed natural gas prices to an all-time high. By Oct. 18, natural gas inventories in Europe were 77% of their full capacity, compared with 95% of capacity last year and a 91% of capacity as a five-year average, according to data from Gas Infrastructure Europe.

Demand for LNG in Brazil has surged in response to the worst drought in more than 90 years, which has led to a decline in hydroelectric power and an increased use of gas for electricity generation. In the first nine months of this year, Brazil’s LNG imports averaged 0.8 Bcf/d, up eightfold from the same period one year earlier, according to Brazil’s Ministry of Economy.

Even as demand surged in Brazil and Asia, world supplies have contracted in response to planned outages over the summer at several LNG export projects in Australia, Russia, and Papua New Guinea. In addition, producers have had unexpected technical trouble that have led to unplanned outages at plants in Norway, Malaysia and Peru. Finally, supplies have been restricted because of lower feedstock gas supplies available for LNG exports at plants in Nigeria, Angola, Egypt and Trinidad and Tobago, the EIA reported.

In addition to spot prices, forward and swap prices of LNG cargoes have also climbed, Bloomberg reported. Swap prices for November liquefied natural gas (LNG) cargos in East Asia rose for the eighth week in a row to a weekly average of $33.92/MMBtu, the highest weekly average on record since January.

At the Title Transfer Facility (TTF) in the Netherlands, the most liquid natural gas spot market in Europe, day-ahead prices rose this report week to a weekly average of $30.43/MMBtu, up $1.03/MMBtu from last week’s average of $29.40/MMBtu.