Worldwide market for LNG rebounds in 2021 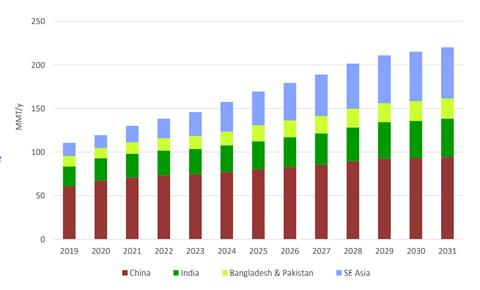 The market for LNG is now at “full throttle” as prices, supply and buying interest are seen climbing in 2021, a sharp contrast from the oversupplied market of 2020, said an analyst at Poten & Partners, a global consulting and analystics firm that focuses on oil & gas and shipping.

Prices have risen in response to stronger than expected turnarounds, strong demand in Asia and low inventories in Europe. Spot prices have risen about $13/MMBtu for August and September. Looking forward to the near future, Wong said the fundamentals remain supported despite recent price corrections in Europe and Asia.

Poten sees steady growth in demand for LNG through 2030 from Asia, particularly India, southeast Asia and China. Demand from the traditional Asian consumers, primarily Taiwan, Korea and Japan, is expected to be essentially unchanged for the next decade. Meanwhile, European gas demand is not growing much and LNG into the region will have to compete with pipeline supplies.

Current LNG freight rates are “unusually high” for the summer months. Charter rates for one-year time charter have exceeded $100,000 per day for vessels with the newer Megi/X-DF engines, she said. However, spot charter rates are down 12% to $75,000 per day for the Pacific region. In general, LNG transporters are actively seeking ships ahead of the winter because of the difficulty of getting capacity last year, Wong said.

Looking forward to the winter, Poten expects weather to be the biggest factor. Inventories are expected to be low at the start of the winter and will be drawn down as the winter progresses. The net effect is expected to keep prices relatively high for the rest of the year and 2022.

The market fundamentals in Europe and the startup of Nord Stream II are two key “wildcards” that will affect future prices, Wong said. The supply from the Russian project will affect the ability to rebuild stocks. Asian buyers will have to pay above European LNG benchmarks to draw incremental supplies away from Europe.

Poten is also concerned about potential outages and supply issues and noted that congestion in the Panama Canal could also affect prices. China and South Korea, meanwhile, are expected to be key buyers this winter. Low hydroelectric stocks could make Brazil a key factor in the world LNG market and additional buyers could include Argentina and Chile.

A recovery in oil prices, tighter global supplies and strong forward curves could help greenfield projects gain momentum, but the market could be oversupplied by the middle of the decade, Wong said.

Many project managers are trying to make a final investment decision, but “there is not enough space for everyone,” she said. “We expect that only a few projects will make it to the finishing line.”

Many potential LNG buyers have made commitments to transition to renewables and are now questioning the wisdom of signing long-term contract to buy LNG. Meanwhile, the recent increase in steel and labor costs could drive up costs for greenfield projects.

Poten sees a rising concentration of supply from a handful of producers. The largest five producing countries – Qatar, Mozambique, Russia, Australia, and the U.S. -- are expected to account for 74% of global supply by 2030. The top five oil producers, by contrast, only account for 51% of world production, Wong said.

Qatar is expected to show the largest growth in export capacity through 2030. The aggressive expansion plans in Qatar make it difficult for current sellers and new projects to decide if they wish to compete. Qatar has plans to invest $28 billion in new projects.

With all of that expansion, Poten said there could be room for U.S. producers to meet the demand shortfall after 2025. Although there is a need for additional supply over the next 10 years, producers working on new ventures will need to be extremely competitive.