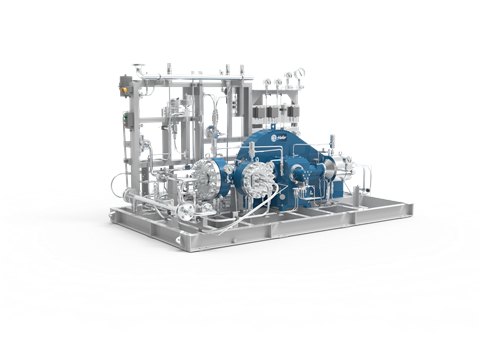 NEA Group has seen opportunities as an increasing number of well-known and new customers in the region seeks equipment that produces, transports and stores alternative energy, largely in hydrogen.

Clear public policies are essential for creating market incentives for investments in new industries. Stefanie and Alexander Peters, managing partners of Neuman & Esser (NEA Group), expect to grow in the coming years as a result of Europe’s and many other countries commitment to a carbon neutral economy.

Stefanie Peters said their family business has seen opportunities as an increasing number of well-known and new customers in the region seeks equipment that produces, transports and stores alternative energy, largely in hydrogen.

Europe is second in the world with regard to installed renewable power capacity behind China followed by USA and thus pursues the development of hydrogen as a fuel and a carrier of energy with great vigour. “Historically, Europe has always paid attention to environmental topics more than North America. The DNA is more focused on these topics,” she said.

The European Commission set a goal to reach net zero emissions by applying the so called Green Deal by 2050 and Germany has shortened that timeframe to 2045. “So everyone has to think of a decarbonization strategy. It is taken seriously,” she said. In addition to increasing renewable sources and electrifying all sectors as much as possible, hydrogen has been identified to play a major role.

To help reach that goal, the German government created the National Hydrogen Council, a political initiative that includes 26 stakeholders from throughout the hydrogen value chain as well as environmental and scientific associations. The organization makes recommendations about the fulfillment of Germany’s hydrogen strategy. Stefanie Peters has been appointed member of this council by the German government, representing NEA Group and thus the German machinery and plant engineering sector.

NEA Group sees that in Europe, investors are announcing new hydrogen projects more frequently and that the previously announced projects are more mature than in other parts of the world. To cite one example, the company expects more hydrogen refueling stations in the coming years.

NEA Group does not produce hydrogen. Instead, it develops and manufactures the technology and equipment used to make it, move it and store it. Europe has also shown a clear need for investments in electrolyzers (50 GW until 2030), compressors and hydrogen storage facilities. “We will deliver the right equipment for our customers who will use and produce hydrogen,” she said.

By 2030, the German government wants 10 GW of electrolyzer capacity installed throughout the country. It is difficult to accurately assess the current production capacity in Europe for electrolyzers, but NEA Group has estimated that it is around 500 MW per year. Up to now installed capacities of running electrolyzers in Europe are around 135 MW only.

To reach the goal of 10 GW installed capacity, the country will need a lot more electrolyzers in the near future. In addition, that investment will be in both central big alkaline electrolyzers as well as decentralized and standardized and hence scalable PEM electrolyzers manufactured from an assembly line. At the moment, many of the current investment is for one-off projects, Peters said.

In response to these policy goals, NEA Group has seen a resurgence in interest for diaphragm compressors needed to compress and fill trailers to transport the hydrogen. “We also see a significant increase in inquiries and sizes for bigger HRS stations,” she said. Current projects are relatively small, but NEA Group expects projects in the future to be around HRS’s with 10 tons/day.

This interest creates opportunities to invest in hydrogen for mobility, including buses, trains and fleet vehicles. The most immediate opportunities are for any transportation system that has a prescribed route and centralized refueling stations. In addition, public utilities are showing a growing interest in hydrogen, Peters said.

Previously, a lot of the announcements were for FEED studies of hydrogen refueling stations and other hydrogen-related projects. Other projects are for hydrogen generation, storage and transportation.

The country’s main gas pipeline network needs to be converted into a hydrogen network.

“This will take time,” she said. European policy makers need at least two years of planning to convert parts of the existing pipeline network the so-called European Hydrogen Backbone. After that, it will take three to four years to implement those plans.

In addition to transportation and the evolution of the European pipeline system, NEA Group sees opportunities in the attempt to decarbonize the steel and glass industries -- or any industry that needs and requires heat in its manufacturing process.

In response to this growing interest in technologies and equipment that produce lower emissions, NEA has founded NEA Green, a company for consulting and marketing services that focuses on project development in the hydrogen economy. The consultancy helps customers specify what specific technology they need to implement a green energy project. The company also looks for subsidies to develop green energy projects and can act as a broker for biogas and hydrogen produced from those projects.

Earlier this year, NEA GROUP became part of the H2 Green Development GmbH, a joint venture with two other companies that covers the entire hydrogen value chain from the development of renewable energy through the use of that energy, Peters said. NEA Group’s partners include the regional construction company Frauenrath Beteiligungs-GmbH and the BMR Umwelt GmbH, a developer of renewable energy plants.

The construction company also runs chemical plants, an experience which gives them insights into how industrial processes work and an understanding of how to decarbonize them.

The purpose is to combine the knowledge, experience and expertise already available to the individual shareholders in their respective fields in order to develop economic solutions. The approach will enable medium-sized companies located in industrial parks to transition to climate-neutral material flows by means of integrated green Hydrogen systems. The company aims to achieve a scalable and overall economical design of decentralized, synergistically planned systems. In this context, decentralized and sustainable hydrogen concepts are to be transferred into reality by the shareholders’ contributions to develop the concept and methodology that are significantly lacking and to economically transfer them into real projects.

NEA Group has added electrolyzers to its portfolio in 2020 after purchasing HYTRON Energy and Gas that was in that market for 20 years. In the past, that company located in Campinas, Brazil, had received inquiries for smaller pilot projects. Now, however, it gets inquiries for projects in the range of hundreds of MW.

Many of these inquiries are for electrolyzers in the range of 30 – 40 MW but it has also seen inquiries for electrolyzers of smaller scale, where hydrogen would be produced on the site and used in hydrogen refueling stations. Ideally, this would be close to a wind or solar farm, Peters said.

NEA Green has also realized a resurgence in interest in biomethane. Currently, there are more than 9,000 biogas plants in Germany only and an increasing number in the neighboring countries.

“It is carbon-free and can be used to produce e-fuels, hydrogen and other derivatives,” she said. “We try to bring this discussion into the picture because biomethane is a very good means to decarbonize processes and to decarbonize the energy system.”

The Netherlands, for example, is transferring from natural gas to biomethane and then to hydrogen production plants. This process is an efficient way to transition away from CO2 generated from fossil oil & gas

In Germany only around 3% of the country’s required gas comes from biomethane. Biomethane has gained value as the price of carbon-free energy has increased.

In Europe, the cost to produce biomethane could be 30% cheaper than importing natural gas. “We are heavily dependent on imports,” she said. The production of biomethane in Germany has two benefits: it gives the country more control of its own energy and its production costs are less than importing gas.

“We believe that hydrogen is the only possible and economic way to decarbonize the energy sector and to decarbonize industrial processes,” she said, but German policy makers need more initiatives to emphasize implementation. Converting green electrons to H2 molecules makes renewables from wind and solar transportable and storable in the required quantities.

“If we don’t build it and put it on the street, we will not get anywhere. The technology is ready. The industry can do it. We just need the right incentives and regulations (level playing field) to make the investments that are necessary for the ramp up of the H2 Economy,” she said.

Although European policy makers have made lofty goals for emissions reduction and decarbonization, its plans for full implementation are not fully flushed out, Peters said. They still need to plan the details of how the region plans to implement these goals and put them into practice. To make hydrogen widely available to consumers, Europeans still need to define a few details.

“We don’t have the right regulations. We don’t have standard certification of product. We don’t have harmonization of standards amongst European companies for revamping the backbone pipeline network,” she said.

Another problem is financing. It’s said that until the end of this decade, about €10 to €24 billion of subsidies are necessary to encourage companies to develop technologies that reduce carbon emissions in the EU. But Peters said the rules behind the subsidies are so complex that companies cannot access them easily. As a result, Peters is skeptical of the current levels of subsidies will ever result in new production.