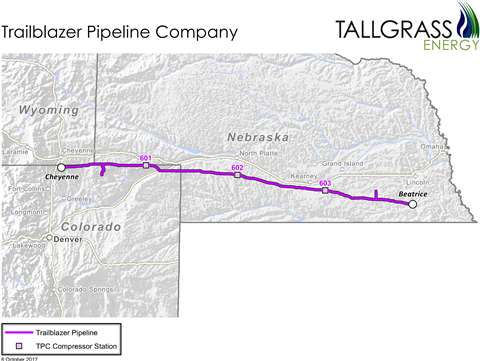 Tallgrass plans to convert its Trailblazer natural gas pipeline to a CO2 pipeline and use the approximately 400-mile line as a backbone of a regional CO2 transportation system. The pipeline, which runs through Wyoming, Colorado, and Nebraska, will be capable of transporting more than 10 million tons of CO2 per year for permanent sequestration, Tallgrass said.

“We are excited to work on this project with ADM, a company that’s already demonstrated it is on the cutting edge of carbon capture,” said Kyle Quackenbush, segment president at Tallgrass. “We’re able to repurpose existing infrastructure to create significant CO2 transportation capacity without impacting natural gas service in that region.”

Tallgrass said its CO2 transportation will enable customers to meet decarbonization goals and to minimize impact on landowners. “Our CO2 pipeline will be capable of transporting significant additional CO2 volumes to accommodate the capture, transportation, and sequestration of many other emissions sources in the region,” he said.

“ADM is meeting growing customer demand, advancing our strategy and living up to our purpose by continuing to lead in the decarbonization of our industry,” said Chris Cuddy, president of ADM’s carbohydrate solutions business. “Earlier this year, we announced an agreement that would allow us to sequester carbon from two of our biggest processing facilities in the U.S., and now we’re looking forward to working with Tallgrass to continue our work towards meeting our decarbonization goals.”

Earlier this year, Tallgrass announced it received a grant from the Wyoming Energy Authority to fund the development of a commercial-scale CO2 sequestration hub in the Denver-Julesburg (DJ) Basin in eastern Wyoming. The grant is in addition to the company’s proposed direct investment in the Eastern Wyoming Sequestration Hub project, which is designed to provide a cost-effective means of capturing, transporting and sequestering CO2 across multiple states.

Tallgrass expects to utilize the WEA grant in 2022 to fund development activities and drilling a characterization well in connection with its anticipated Class VI permit filing for the hub.

Meanwhile, Trailblazer Pipeline, a division of Tallgrass, has proposed to move the pipeline out of the jurisdiction of the Federal Energy Regulatory Commission and plans to lease capacity from Rockies Express Pipeline to provide gas transportation for its existing shippers, Platts reported.