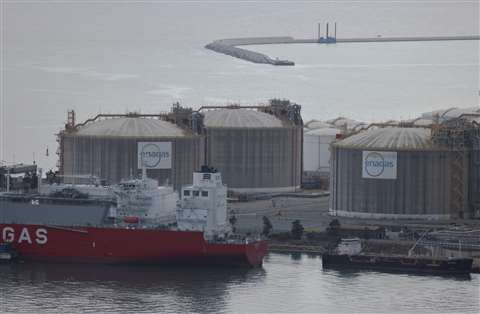 An LNG tanker delivers into a Spanish port. (Photo: Reuters.)

A subsidiary of Sempra signed a preliminary agreement with the Polish Oil & Gas Company (PGNiG) that will ultimately lead to the purchase of about 3 million tonnes per annum (Mtpa) of liquefied natural gas from Sempra’s projects in North America.

“Today’s agreement underscores our commitment to help provide greater energy security to Poland and our global partners through long-term LNG sales,” said Dan Brouillette, president of Sempra Infrastructure. “Our relationship with PGNiG is core to this commitment, and we are excited to continue working closely with them to advance more reliable, secure and increasingly clean energy solutions.”

The agreement also provides PGNiG the opportunity in 2022 to reallocate volumes from the Cameron LNG Phase 2 project to the Port Arthur LNG project. Additionally, Sempra Infrastructure and PGNiG expect to continue working toward a framework for the reduction, mitigation and reporting of greenhouse gas emissions across the LNG value chain.

“The agreement signed today paves the way for negotiations of detailed terms that would provide PGNiG with LNG from a reliable and highly valued infrastructure partner. Here in Poland, LNG is already one of the cornerstones of our diversified strategy to enhance Polish energy security, as well as to strengthen the commercial potential of the PGNiG Group,” said Iwona Waksmundzka-Olejniczak, PGNiG president. “We are determined to further expand our operations in this direction and are therefore taking steps to secure access to adequate natural gas volumes in the future.”

The PGNiG Group produces natural gas and oil and distributes and sells natural gas and its liquids. It operates, among others, in Poland, Lithuania, Norway, Pakistan and the United Arab Emirates.