The refueling stations will deliver hydrogen at both 35 and 70 MPa for light and heavy-duty vehicles.

Sweden’s Hynion has selected PDC Machines as the supplier of compressors for new hydrogen filling stations Hynion will build in Västerås and Jönköping.

The stations represent a new generation with a refueling capacity of dozens of trucks per day, necessitating powerful and robust compressors, which PDC Machines will provide. The stations will deliver hydrogen at both 35 and 70 MPa for light and heavy-duty vehicles.

“We see this partnership as the start of an ambitious, long-term collaboration”, says Ulf Hafseld, CEO of Hynion. “Good dialogue, good products, and good service are important to us. The stations must deliver around the clock, and reliable compressors are indeed critical in this respect”.

“We are delighted to be working in partnership with Hynion and support its vision for a network of renewable and low-carbon hydrogen refueling stations in the region of North Europe. Our advanced hydrogen compression technology, coupled with Hynion’s unrivalled experience in compressed gases and dispensing, will create a reliable, robust, and cost-effective hydrogen refueling solution,” said Kareem Afzal, CEO of PDC Machines.

The delivery will consist of two powerful compressors for each station, which enable the stations to deliver continuously to trucks and cars that arrive at the stations. The stations will be in operation by 4Q23.

Hynion also announced that Swedish energy regulators will provide SEK 61.5 million to build the two stations, which will have a capacity of 1500 kg per day and will be built to facilitate trucks that will be phased in. ,

“This is an important step forward for hydrogen for the transport sector”, says Slavica Djuric, CEO of Hynion Sweden. “We now see clear action from the Swedish authorities that they are serious about introducing hydrogen for heavy transport, which makes us very optimistic about the development.”

The two stations are in central logistics hubs, which will make them attractive to transport companies seeking to lower emissions.

“Together with our stations in Sandviken, Stockholm and Gothenburg, we are forming a network that will allow the roll-out of hydrogen to accelerate”, says Ulf Hafseld, CEO of Hynion AS. Hynion said the growth of the refueling network will make it possible to travel between large and important cities in Sweden. 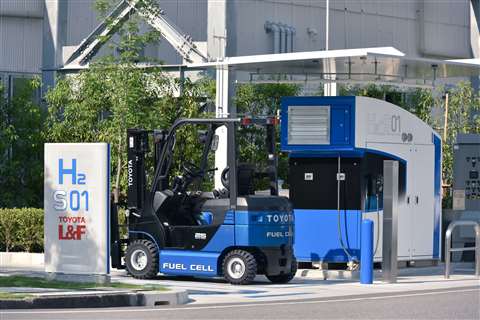