Use of fuel cell vehicles expected to increase in the U.S. 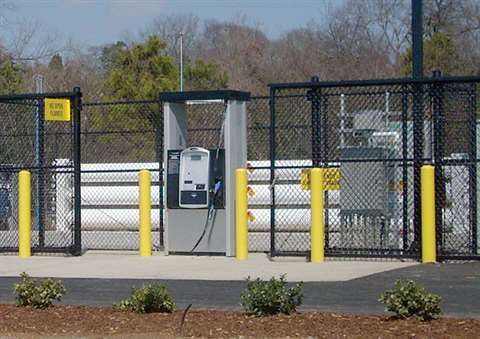 The state of California is seeking to boost the number of hydrogen refueling stations. Photo courtesy of GTI.

Although natural gas continues to fuel a significant portion of the U.S. transportation sector, the use of hydrogen fuel cells in transportation is expected to ramp up significantly in the next three to five years, an energy analyst has forecast.

Nico Bouwkamp, business development manager at the Gas Technology Institute, said that some regions in the U.S. have set some aggressive goals for transferring public transportation away from hydrocarbons as a primary fuel.

During a public webinar broadcast recently by the GTI, Bouwkamp said that hydrogen as a technology for public transportation has advanced significantly over the last 20 years.

Two decades ago, this technology was a concept for cars and buses and researchers could not agree on the precise fuel or its mixture that fuel cell vehicles should use or how to store and transport that fuel, he said.

Today, the technology has developed and fuel cell vehicles are sold in several parts of the world. Looking forward, there are additional challenges the energy industry must confront before fuel cell vehicles see widespread use. For one, the U.S. needs a well developed supply chain for parts and components.

“That has to be developed at scale to reduce the cost of these vehicles,” he said. In addition, the country needs a well developed infrastructure for refueling hydrogen cell vehicles. It also needs additional assets for the production and transportation of hydrogen.

The state of California has been aggressive in creating incentives for zero emissions. By 2035, it wants all freight trucks to have zero emission fuels. By 2045, all trucks and cars on the road need to be zero emission. “These are very aggressive goals,” he said.

The transportation sector has seen the number of its emissions increase as vehicles travel more miles and rely on petroleum-based fuels. In addition, transportation has a disproportionate effect on the effect on number of criteria emissions, which are pollutants that cause asthma and respiratory illnesses, he said.

Policy makers who want to reduce emissions within the transportation sector should look at all alternatives available to them – electric vehicles, hydrogen, renewable natural gas, sustainable aviation fuels and biofuels. “The scale of this problem is so large that we really need to focus on all of our alternatives,” he said.

The Gas Technology Institute is looking at a variety of alternatives for reducing emissions from transportation. In one case, they are studying the viability of a hydrogen fueled drone. In another case, the institute is studying the possibility of locomotives fueled with renewable natural gas or hydrogen.

Beyond that, the institute is studying the development of sustainable aviation fuels.

The research and development of alternative fuels is a critical component of reducing greenhouse gas emissions. “The status quo is not going to get it done,” he said. “the current economic costs and the current technology are not good enough. We need to develop all of these technologies.”

The GTI’s research has also looked at hydrogen hubs, clean hydrogen production and the delivery and storage of hydrogen.

The funds will be used to retire a tier 0 diesel locomotive and to replace it with a zero-emission switching locomotive using advanced hydrogen technology. The project involves the integration of advanced hydrogen fuel cell, hydrogen storage, advanced battery and systems control technologies to provide an alternative to less environmentally friendly diesel-powered locomotives, the GTI announced. The demonstration will facilitate the improvement of local air quality, a reduction in greenhouse gas emissions, noise and odor, the GTI said.