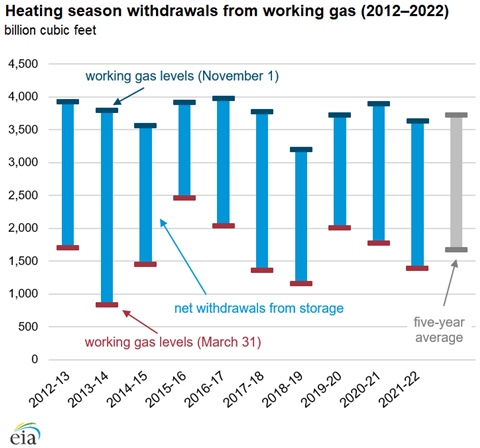 Working natural gas stocks stored in underground storage facilities in the lower 48 states totaled nearly 1,387 billion cubic feet (Bcf) as of March 31—the end of the winter heating season, according to the latest report from the U.S. Energy Information Administration. This level was 16.8% lower than the five-year average for this time of year.

At the same time, net withdrawals from working natural gas stocks during the 2020–21 heating season exceeded the five-year average by 9.7%. Following a slow start to the 2021–22 heating season, an extended series of colder than usual temperatures throughout large portions of the country led to strong demand for gas in the residential, commercial and power sectors.

Consumption from those three sectors was 3.4 Bcf/d, up 5.6% higher than the previous season, according to data from PointLogic. LNG deliveries also increased during the 2021- 2022 heating season, surpassing last year’s level by 1.8 Bcf/d, or 18.4% from the previous year. This surge in natural gas demand during the heating season more than offset the 4.5 Bcf/d increase in gas production from previous years.

Working gas inventories throughout the heating season fluctuated steadily, the EIA reported. Stocks were below average, then rose to above average by mid season. This surplus did not last long when colder-than-normal temperatures moved into the Lower 48 states in January, which increased heating demand for gas. Withdrawals from storage surged and gas inventories again fell below the five-year average in January. Since the beginning of the year, net withdrawals from working natural gas exceeded the five-year average in 10 out of 13 weeks, and working natural gas inventories went from a surplus of 96 Bcf as of December 31, 2021, to a deficit of 285 Bcf by April 1, the EIA reported.

Net withdrawals from underground storage facilities in the lower 48 states in January 2022 totaled 991 Bcf—the largest draw for the month since 2012. Net withdrawals during January accounted for about 44% of all withdrawals from natural gas storage during the 2021-22 heating season, compared with 35% over the previous five heating seasons. In January 2022, population-weighted heating degree days (HDDs) were 9% higher than normal, which drove the higher-than-normal withdrawals, the EIA reported.

Meanwhile, natural gas spot prices rose at most hubs throughout the country. The Henry Hub spot price rose from $6.25/MMBtu to $6.70/MMBtu by mid month.

International natural gas spot prices slipped moderately in mid April, but remain elevated from the start of the Russian invasion of the Ukraine. have remained elevated since the start of Russia’s further invasion of Ukraine on February 24, which has thrown European gas markets into turmoil.