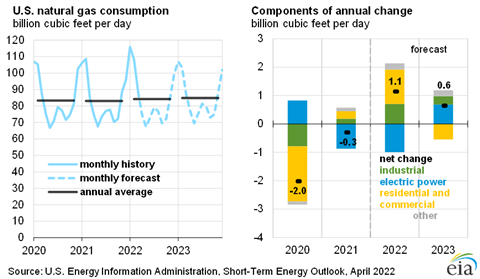 Tighter gas supplies in the United States and an ongoing climb in exports are expected to push gas prices higher for the remainder of the year, according to the latest short-term energy outlook published by the U.S. Energy Information Administration.

Inventory withdrawals outpaced the five-year average in March and LNG exports are expected to continue to climb, keeping supplies tight in the near term. The EIA was quick to add that its forecasts remains highly uncertain because of the Russian invasion of the Ukraine. “Russia’s actions came at a time when global inventories of crude oil, natural gas, and coal were below average, contributing to continued price volatility and high prices,” the EIA said.

“We forecast that natural gas inventories will end the 2022 injection season (end of October) at 3.5 Tcf, which is 4% below the five-year average,” the EIA wrote.

In March, U.S. LNG exports averaged 11.9 Bcf/d, up 0.7 Bcf/d from February. Despite the climbing gas prices in the U.S., the price for gas in Europe is higher, leaving the arbitrage for LNG exports open. European prices remain high amid supply uncertainties caused by Russia’s invasion of Ukraine and the need to replenish Europe’s natural gas inventories. Inventories in Europe were 26% full as of March 31, compared with the five-year average of 34%, the EIA reported.

U.S. gas consumption will average 84.1 Bcf/d in 2022, up 1% from 2021. Residential and commercial consumers are expected to use more gas this year because of colder temperatures forecast for 2022. In addition, the EIA said it expects the industrial sector to consume more natural gas in 2022 in response to expanding economic activity. Looking further ahead, the EIA said it expects U.S. natural gas consumption to average 84.7 Bcf/d in 2023.

The EIA estimates dry natural gas production averaged 96.2 Bcf/d in the United States in March, up 1.2 Bcf/d from February. Production in March was lower than in December because of brief periods of freezing temperatures in certain production regions and, in part, because of maintenance, according to public sources.