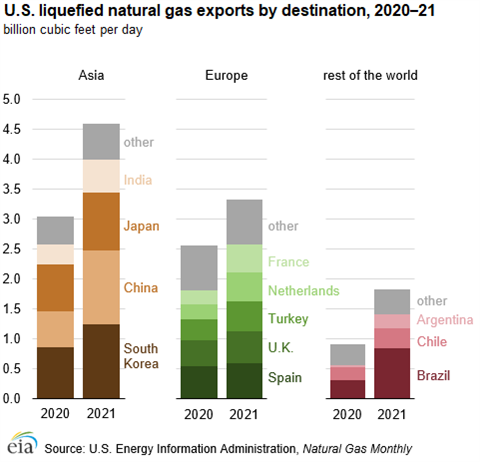 U.S. exports of liquefied natural gas (LNG) set another record high in 2021, averaging 9.7 billion cubic feet per day (Bcf/d)—an increase of 3.2 Bcf/d (50%) compared with the prior year, according to recent data from the U.S. Energy Information Administration.

U.S. LNG exports to Asia increased by 1.5 Bcf/d, or 51% from the prior year and accounted for the largest share of all U.S. LNG exports at 47% (4.6 Bcf/d). Last year, the United States became the third-largest LNG supplier to Asia, accounting for 12% of total LNG imports into Asia, after Australia and Qatar, which supplied 10.3 Bcf/d (29%) and 7.4 Bcf/d (21%), respectively, according to estimates based on data from CEDIGAZ, the international natural gas trade association.

Among Asian countries, South Korea and China were the top two destinations for U.S. LNG exports at 1.2 Bcf/d each; South Korea imported only 10 million cubic feet per day (MMcf/d), about 0.8% more than China. Last year, China more than doubled its LNG imports from the United States, an increase of more than 0.6 Bcf/d.

China has been increasing imports of U.S. LNG every year since it cut tariffs on imports of LNG from the United States from 25% to 10% in 2019. Japan was the third-largest importer of U.S. LNG in Asia in 2021, at 1.0 Bcf/d. Combined, these three countries accounted for 75% of U.S. LNG exports to Asia and 35% of the total exports last year, the EIA reported.

European countries (including Turkey) imported 3.3 Bcf/d of LNG from the United States, an increase of 0.8 Bcf/d (32%) from the prior year. In addition, exports to Europe accounted for 34% of total U.S. LNG exports. U.S. LNG exports to Europe increased from February to April in 2021 following a cold winter and low storage inventories at the end of the heating season.

LNG exports from the United States to Europe averaged 6.7 Bcf/d in December—the highest monthly export volume to Europe from 2016 to 2021. The largest increase in exports was to the Netherlands and France (up by 0.2 Bcf/d each), followed by Turkey and the United Kingdom, the EIA reported.

Ten other countries accounted for the remaining 19% (1.8 Bcf/d) of total U.S. LNG exports in 2021, led by Brazil. U.S. LNG exports to Brazil increased by 0.5 Bcf/d compared with 2020, and averaged 0.8 Bcf/d on an annual basis. Last year, Brazil experienced its worst drought in more than 90 years, which limited hydroelectric power generation and required higher volume of natural gas imports to generate electricity by natural gas-fired power plants.