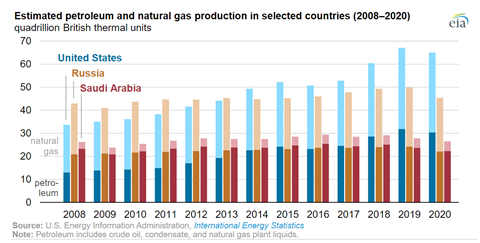 The United States produced more oil and gas than any other country in 2020, a trend that started in 2014 and continued despite year-on-year declines from record high production in 2019, the U.S. Energy Information Administration reported recently.

A rapid decline in worldwide demand caused by the COVID-19 pandemic led to a decline in production last year from all three countries. Saudi Arabia and Russia agreed to cut oil production as part of an OPEC + agreement, but producers in the U.S. cut output in response to a decline in oil prices and, to a lesser extent, unplanned outages.