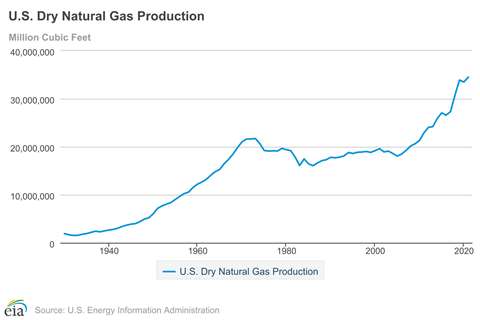 Gas production fell in 2020 because of a decline in economic activity during COVID-19, but by 2021 production had bounced back and surpassed the previous record set in 2019. The EIA’s latest Short-Term Energy Outlook forecasts that production will continue to grow through 2023 as stronger domestic gas prices have encouraged production.

Last year, Texas and Pennsylvania have led to the largest increase, where total production grew nearly 1.5 Bcf/d from 2020 to 2021.

The growth in production from Texas comes from both the Permian Basin and Haynesville Basin, which were both major sources of production growth in 2021. Similarly, Pennsylvania overlays the Appalachian Basin, which accounts for nearly one-third of all U.S. dry natural gas production.

The fields in the offshore Gulf of Mexico have traditionally accounted for a significant source of gas production, but in recent years production from this region has fallen in response to several factors: aging wells with declining productivity, a focus on oil development and the high cost of undersea production, the EIA reported.

Imports of gas fell dramatically between 2007 and 2017 and have remained low ever since. The United States is a net exporter (exports exceed imports) of natural gas. Exports of natural gas have been growing each year since 2016, driven by exports of liquefied natural gas (LNG), which reached a record high in 2021.

Total working natural gas stored in the lower 48 states at the end of September was 3,106 Bcf, down 8% from the average within the five-year historical average, but filling quickly with net injections exceeding 100 Bcf for the last three weeks of September, the EIA reported.

The large injection at the end of September was the result of growing production and a decline in demand. When Hurricane Ian made landfall in Florida at the end of the month, 2.6 million homes and businesses in the state were without power.

Based on data from the EIA and PointLogic, natural gas production in the 2022 injection season has been higher than any other refill season on record and 4.2% higher than the average in 2021.

As gas inventories climb, the EIA has said it expects most U.S. households to pay more for heating this winter. In its 2022 Winter Fuels Outlook, the EIA has predicted that higher U.S. residential energy prices compared with last winter.

The National Oceanic and Atmospheric Administration expects the United States to experience a slightly colder winter than last year, which could likely lead to higher consumption of heating fuels. That higher consumption and higher energy prices contribute to EIA’s forecasts for higher heating costs for households.

The EIA also forecast that the Henry Hub spot price would average $7.40/MMBtu in 4Q22 before falling to $6/MMBtu in 2023. In addition, it expects natural gas inventories to end the injection season at nearly 3.5 Tcf, about 6% below the five-year average.

Domestic consumption of natural gas will average 87.9 Bcf/d in 2022, up 3.9 Bcf/d from last year as demand rose in all sectors.