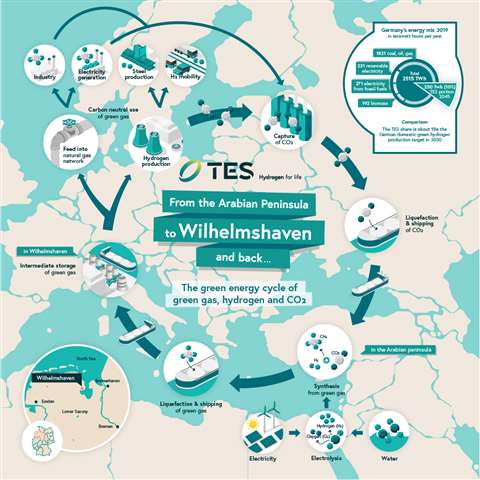 In an effort to diversify Germany’s sources of gas imports, Tree Energy Solutions said it would accelerate plans to develop a green gas terminal in the German port of Wilhelmshaven. The project will also accept traditional imports of liquefied natural gas as an intermediate source of supply, the company said.

TES’ Wilhelmshaven project started in 2019. The decision to accelerate the development of the project could help Germany reach its sustainability goals and prevent future stranded assets, the company said.

“We are now planning further work to ensure an operational start of phase 1 by winter 2025 at scale. In view of our planned full scale -- we are planning 6 independent tanks combined with 6 ship-berths using a novel approach with minimal environmental and visual impact -- we are also willing to constructively accommodate any alternative gas importers and still ensure third party access in line with current DG Energy regulations and practices,” said Paul van Poecke, Founder and Managing Director at TES.

TES said it welcomes participation from other parties on the condition that it accelerates the project and does not jeopardize the long-term clean and green energy ambitions.

“The TES-Wilhelmshaven project is unique in its ability to achieve Germany’s and Europe’s plans to decarbonise in a sustainable way at an industrial scale whilst carefully and prudently navigating the current energy-crisis,” Van Poecke said. “We want to boldly drive forward energy transition with the aim of making Germany’s energy supply CO2-neutral. This will be achieved by developing Wilhelmshaven as a green energy hub.”

The latest developments do not interfere with the energy targets to be met by 2045, he said.

“The primary objective of the European Union’s decarbonisation policy is to achieve the fastest possible reduction of CO2 emissions at the lowest possible cost,” said Otto Waterlander, chief commercial officer at TES.

Green hydrogen imported by TES will significantly accelerate the energy transition in Germany and help the mobility, industry and power sectors achieve their decarbonization targets and solve the energy storage problem. It will make an immediate impact on CO2 emissions and eliminate customers’ exposure to significant CO2 costs. Our Wilhelmshaven project will account for 10% of the total annual primary energy demand of Germany by 2045, approximately the annual energy consumption of 43 million households in the country, he said.

The announcement came two days after German Chancellor Olaf Scholz told the German parliament the country wants to expedite the construction of two liquefied natural gas terminals in an effort to cut ties with German gas following the invasion of Ukraine.

Germany imported around 50.6 billion cubic meters (1.7 Tcf) of Russian gas during 2021. Imports from Russia stood at around 60 percent of Germany’s total imports during the past year, Platts reported.