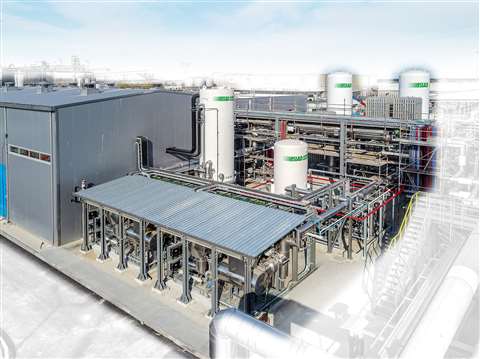 The re-liquefaction plant developed by SIAD Macchine Impianti will treat 1,100 kg per hour of methane.

Italian machine and engineering company SIAD Macchine Impianti has installed and commissioned a reliquefaction plant and four cryogenic compression packages to recover and reliquefy evaporated natural gas at a facility in the port of Ravenna.

The reliquefaction plant will capture evaporated boil off gas at the small-scale LNG facility, which is jointly owned by PIR Group, Edison, and Enagás.

The storage facility consists of two atmospheric storage tanks for liquefied natural gas (LNG), which is transported by Edison to Ravenna by means of LNG carriers. The gas is stored in the tanks at the depot and made available for bunkering or to filling stations on the Italian mainland.

The storage facility has a capacity of 20,000 cubic meters and the capacity to handle more than 1 million cubic meters of LNG annually. The facility will be able to refuel up to 12,000 trucks and up to 48 ferries per year, making it a strategic point for LNG refueling throughout the northern Adriatic, the company said.

Liquid methane partially vaporizes during the various transfer operations from the LNG tanker and during distribution, passes from the liquid state to the gaseous state. The boil-off gas, as it is known, is then compressed and re-liquefied before it is reintroduced into the storage tanks.

The re-liquefaction plant developed by SIAD Macchine Impianti will treat 1,100 kg per hour of methane, for a total of about 26 tons per day of recondensed gas, thus long-term savings possible, the company said.

As a result of the use of methane, the plant is estimated to save an estimated 6 million tons of CO2 over the lifetime of the plant.

SIAD Macchine Impianti also designed and supplied four BOG compressors, which are oil-free and with ATEX certification. Two of the compressors will re-liquefy the evaporated gas and the other two will transport boil-off gas from the LNG transfer operations from the carrier to the storage facility.

Depositi Italiani GNL has chosen the SIAD Group as a partner for the Italian project. SIAD MI began design and construction in August 2019 and completed the project in 11 months. SIAD MI delivered, installed, tested and commissioned the plant and compressors and will continue remote monitoring its activities, the company said.

The plant started commissioning in August, when an LNG carrier fueled the plant with natural gas. Industrial operations started in October.