U.S. natural gas companies are set to produce a record 93.3 billion cubic feet per day (Bcf/d) in 2022, a production rate that is expected to continue to grow for two years after that, a global energy analysis firm has predicted. By 2024, total production in the U.S. will likely surpass 100 Bcf/d, according to Rystad Energy. 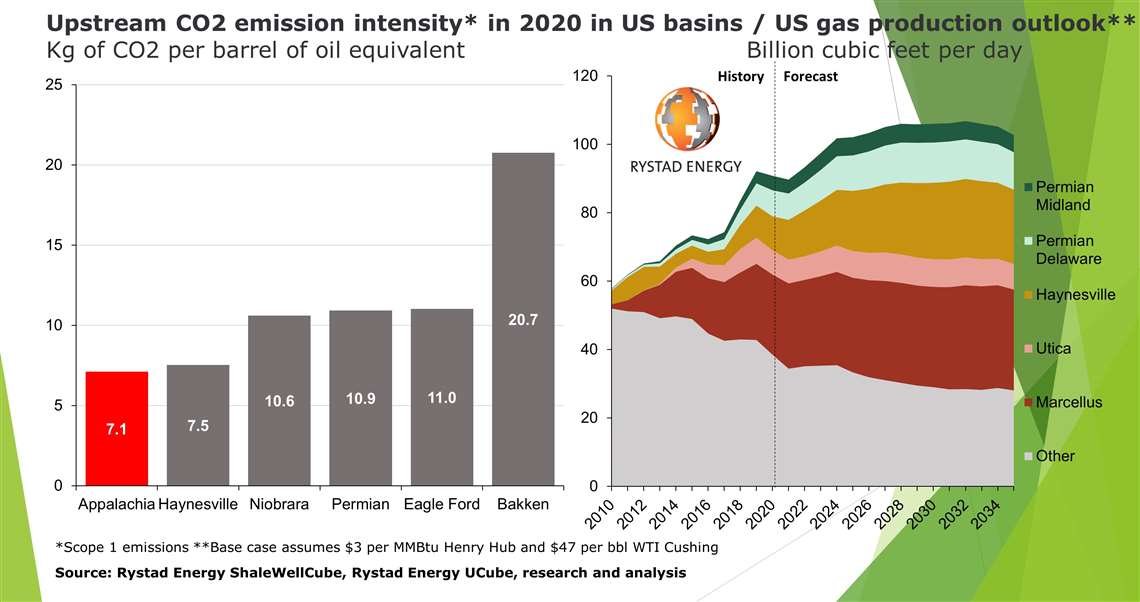 The growing production will mean the country’s key gas basins will attract ongoing attention from investors, policymakers and advocates, who will be watching CO2 emissions intensity, capital efficiency and potential production and infrastructure bottlenecks.

Total U.S. gas production reached a record 92.1 Bcf/d in 2019, but that production declined to 90.8 Bcf/d in 2020 because of the efforts to contain the Covid-19 pandemic, Rystad said. The energy analysis firm predicted 2021 would see another decline, to around 89.7 Bcf/d. That trend will reverse in 2022 as the effect of the pandemic wanes and economic activity picks up across major bas basins in the U.S., Rystad predicted.

The Appalachian Basin is expected to have the industry’s lowest CO2 emissions intensity and the highest capital efficiency in 2021 as reinvestment to maintain output will drop to its lowest ever, Rystad Energy reported. Meanwhile, the Haynesville is expected to report the largest gas growth in the near future. That growth rate brings the risk of additional bottlenecks if more pipelines are not approved, Rystad Energy reported.

The Appalachian region has the lowest emissions in the country because of a well established and relatively modern infrastructure and the adoption of e-frac fleets. The region produced 7.1 kg of CO2 per barrel ofoil equivalent (boe) in 2020, the lowest in the country, Rystad reported.

“Such a level of CO2 intensity performance brings Appalachia to the top quartile among all oil and gas fields globally. As the basin becomes more mature and modern ESG best practices are implemented, we anticipate Appalachia to improve further in its CO2 intensity dimension in the next three to four years,” says Emily McClain, senior analyst at Rystad Energy.

Appalachian gas production has yet to reach its peak despite infrastructure bottlenecks, recent pipeline delays and project cancellations, Rystad reported. In its base case scenario, the company expects production to grow about 16% in Appalachia before it reaches a plateau. Meanwhile, producers in the Marcellus and Utica formations are expected to add another 5 Bcf/d over the next two decades.

Despite the expected growth in production from the Appalachian region, its proportion of the nationa’s total gas supply will stay constant, at 36% in 2035, about the same as in 2021, Rystad reported. “Appalachia will continue to remain the dominant supplier given its significant inventory of remaining drilling locations,” Rystad reported.

Producers in the Haynesville are expected to become the largest source of gas production growth in the U.S., adding about 10 Bcf/d from 2020 to 2035, an 86% increase in that timeframe. By 2035, the Haynesville is expected to account for about 21% of the country’s total production, up from 13% in 2020.

Rystad estimated that the Haynesville is expected to see production growth of 5 Bcf/d over the next five years based on a conservative level of drilling, robust permitting activity and an expanding inventory of commercial locations. Producers in the Haynesville have one key advantage over their counterparts in Appalachia: the relative ease of moving gas from wellheads to gulf coast markets compared to the bottlenecks and midstream projects cancellations that Appalachian producers face, Rystad reported.