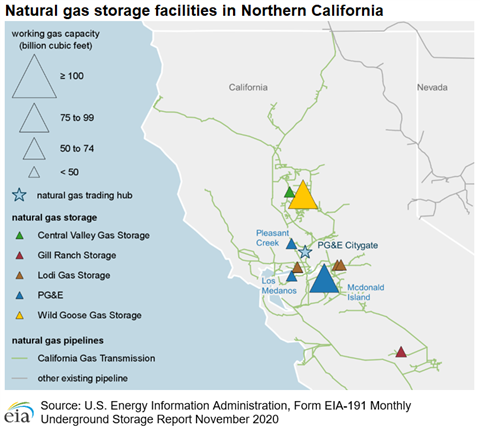 The reported inventory of natural gas storage facilities held by at Pacific Gas and Electric fell abruptly from 72.9 Bcf to 22.0 Bcf in the first half of June, according to a recent report from the U.S. Energy Information Administration.

Base gas reflects the amount of gas needed to maintain adequate reservoir pressure and deliverability rates throughout the withdrawal season. The reclassification was the single largest day reduction in working gas ever reported at the PG&E facility, surpassing the withdrawals from the heating season that stretched from November through March.

The reclassification of the stored gas is part of a change in focus in how the company uses its storage facilities. It is using the stored gas to ensure system reliability rather than as a commodity price management tool. The narrower operational mission will enable the company to serve customers with fewer natural gas storage assets, the EIA reported.

In addition to maintaining larger base gas levels in its storage facilities, the company plans to sell or decommission the Pleasant Creek and Los Medanos fields in 2021, a plan the California Public Utilities Commission has already approved.

The spot price for gas at Henry Hub rose 16 cents from $3.17/MMBtu to $3.33/MMBtu earlier this week. A large part of the increase stems from an increase in demand from Texas power producers who saw a surge in demand for electricity. Prices in Katy, Texas, also increased this report week from $3.21/MMBtu to $3.32/MMBtu. Gas prices also surged as electricity from wind farms fell last week, the EIA reported.

U.S. consumption of natural gas fell by 1.8% this week. Natural gs consumption for power generation fell by 4.3% from last week, according to data from IHS Markit. Meanwhile, gas deliveries to U.S. liquefied natural gas (LNG) export facilities averaged 10 Bcf/d, up 0.54 Bcf/d from last week and well above the five-year average.

Total LNG exports from 17 LNG vessels with a carrying capacity of 62 Bcf left the U.S. between June 17 and June 23, Bloomberg reported.