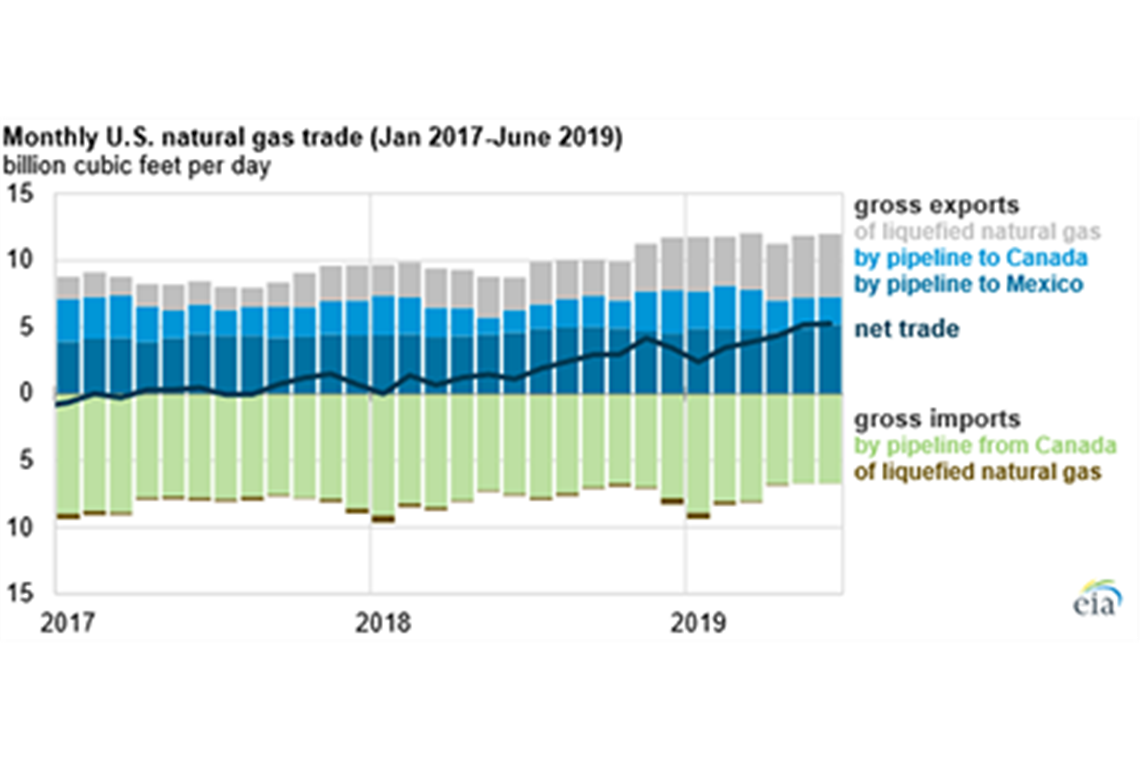 From January through June, U.S. net natural gas exports averaged 4.1 bcfd, more than double the average net exports in 2018, according to data from the U.S. Energy Information Administration. The United States became a net natural gas exporter on an annual basis in 2017 for the first time in almost 60 years.

The United States exports natural gas by pipeline to neighboring Canada and Mexico and exports liquefied natural gas (LNG) to several other countries. Much of the recent increase in total exports is a result of more LNG facilities coming online. Total U.S. exports of LNG through the first half of 2019 were 37% higher compared with the same period in 2018. Total U.S. LNG export capacity as of June 2019 was 5.4 bcfd across four facilities and nine liquefaction trains.

Two new liquefaction trains came online in the first half of 2019 – Cameron LNG Train 1 in Louisiana and Corpus Christi LNG Train 2 in Texas. Cameron LNG was the fourth U.S. LNG export facility placed into service since February 2016. Cameron LNG, which will have a capacity of 1.7 bcf/d when its three liquefaction trains are completed, shipped its first cargo in May as part of the initial commissioning process and then another one in June before ramping up operations in July and August. Corpus Christi LNG Train 2, with a capacity of 0.6 Bcfd, shipped its first cargo in July and reached substantial completion in September.

More LNG facilities have come online in the second half of 2019, including the first train at Freeport LNG in Texas, with a capacity of 0.7 bcfd, and the first 10 trains at Elba Island in Georgia, with a capacity of 0.03 bcfd. These two new LNG export facilities, along with the completion of Cameron LNG, will increase U.S. LNG export capacity to 8.9 bcfd by the end of 2020 from 4.9 bcfd at the end of 2018.

U.S. pipeline export capacity to Canada grew in the last few months of 2018 when the second phase of both the Rover pipeline and the new Nexus pipeline entered service, transporting natural gas from the Marcellus and Utica plays in the Appalachian Basin to the St. Clair point of exit northeast of Detroit, Michigan. Total U.S. natural gas exports to Canada reached 3.3 bcfd in February 2019, the highest level this year as of August 2019.