Net exports of natural gas from the United States are expected to continue to grow in response to new LNG terminals and a steady demand for gas outside the United States. That ongoing climb in net exports, total exports less total imports of gas into the U.S., is expected to continue in the coming years even after the U.S. reached a record exports in 2021, according to a recent study from the U.S. Energy Information Administration.

In March, LNG exports from the U.S. reached a new record of 11.9 Bcf/d. The most recent record is partially the result of the addition of Train 6 at Sabine Pass and the new LNG export terminal at in Corpus Christi.

In September 2019, Sabine Pass filed an application with the U.S. Federal Energy Regulatory Commission to boost the plant’s capacity by 10% to 4.5 Bcf/d. Cheniere Energy Partners, which owns and operates the terminal announced in February that Train 6 was substantially complete. In September 2019, Corpus Christi Liquefaction filed a separate request with the FERC to boost the plant’s capacity 14% to 2.4 Bcf/d. Looking forward, once the LNG export facility is complete at Calcasieu Pass, the U.S. will have more export capacity than any other country in the world, the EIA reported. “We expect that relatively high LNG demand in Asia and Europe will support continued U.S. LNG exports,” the EIA reported.

The U.S. began exporting more natural gas than it imported in 2017. Exports by pipeline and LNG have grown significantly since then. The agency has previously forecast that LNG exports will continue to lead natural gas exports and will average 12.2 Bcf/d this year. If it reaches that level, exports from the U.S. will exceed exports from Australia and Qatar. LNG exports surpassed pipeline exports for the first time in 2021, when monthly LNG exports set an ongoing series of records and averaged 11.3 Bcf/d in the winter of 2021, up 2.2 Bcf/d from the previous winter.

Exports by pipeline will also grow, but by smaller amount, by 0.3 Bcf/d in 2022 and by 0.4 Bcf/d in 2023. The growing pipeline exports are largely the result of more exports to Mexico. Pipeline exports increased in 2021 as new pipeline projects came to completion. The Sur de Texas-Tuxpan Pipeline and the Trans-Pecos Pipeline allowed more natural gas to flow to the markets in Merida and to power plants in Mexico City and Guadalajara.

As U.S. gas exports climb, the agency predicted imports would fall by 0.5 Bcf/d in 2022 and by 0.2 Bcf/d in 2023 because natural gas production from the Appalachia region will likely continue to displace imports from Canada in the midwestern states. The EIA forecast that LNG imports, primarily into New England in the winter months, to remain essentially unchanged in the next two years.

The United States currently is the second largest natural gas exporter in the world, behind Russia. 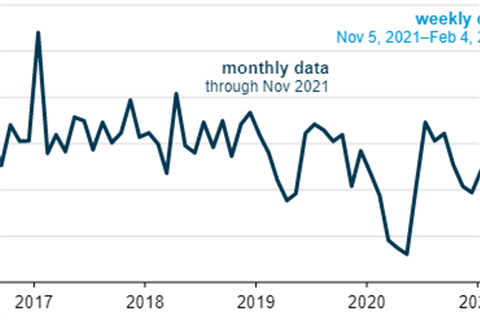