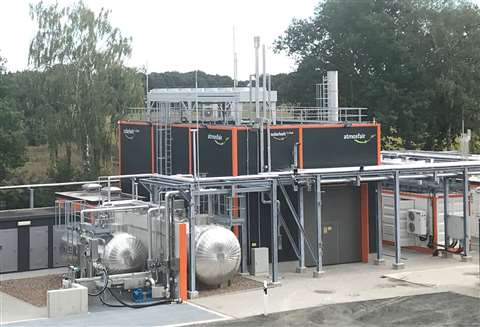 The German non-profit organisation Atmosfair has opened the world’s first plant for the industrial production of carbon-neutral e-kerosene. The aviation fuel is produced using renewable energies as well as CO2 and H2. An important component of the pilot plant is Sauer Compressors’ HAUG.Neptune CO2 compressor. The oil-free and hermetically gas-tight machine compresses atmospheric CO2 to be used as raw material for the green kerosene.

Carbon-neutral flying – the air transport industry’s dream to make the business flourish again despite forthcoming restrictions regarding CO2 emissions. According to the current state of technology, this only works on a large scale with e-kerosene, which is produced from renewable electricity. The so-called Power-to-Liquid fuels (PtL), a liquid combination of electrically generated H2 and CO2, are to be added to conventional kerosene. That’s how the German government envisions it according to their PtL roadmap. However, PtL is currently still considered too expensive for widespread use.

The non-profit organisation Atmosfair is mainly known for offering offsets for greenhouse gases. Since 2021, the company has also been producing synthetic e-kerosene with a plant in Werlte, North Germany. The special feature of the pilot plant is that it produces the first carbon-neutral PtL kerosene ever! Dietrich Brockhagen, founder and CEO of Atmosfair, explains: “As long as airplanes use kerosene, no matter if from fossil or renewable resources, they cause emissions. But for our production process we use CO2 either from a biogas plant or directly extracted from the air.

Thus, when the CO2 eventually gets back into the atmosphere while the kerosene is burned, the carbon footprint is offset.” With a capacity of 350 tons of synthetic crude oil per year, the operation by far exceeds the bench scale. It is the first plant worldwide producing crude oil for e-kerosene approved by ASTM International for commercial aviation. The crude oil is added to fossil fuels in a refinery and distributed to several airlines with a balance sheet certificate (TÜV seal of approval). 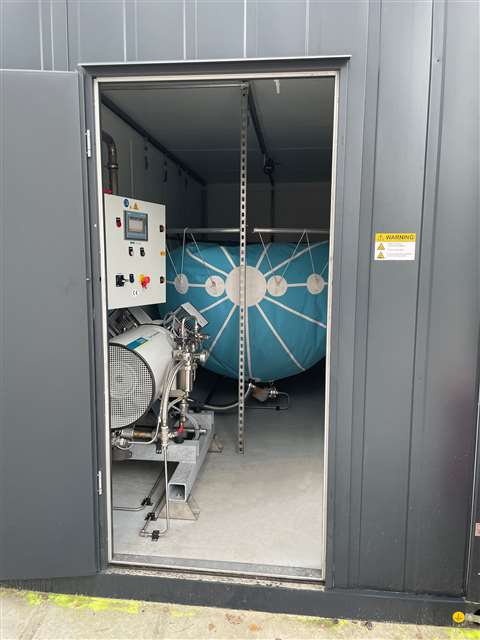 Inside the Direct Air Capture module: The HAUG.Neptune compressor in front, the buffer storage for the CO2 captured from the ambient air in the back. (Photo: HAUG Sauer Kompressoren AG)

The PtL plant uses the three main raw materials electricity, H2 and CO2. The electricity comes exclusively from renewable resources without funding from the German Renewable Energy Sources Act (EEG). The hydrogen is produced from water by electrolysis using electrical energy. A proton exchange membrane (PEM) acts as the electrolyser and electrochemically splits water into hydrogen (H2) and oxygen (O2).

One source of the CO2 needed for the process is an on-site biogas plant. As the substrates used by the plant only contain carbon dioxide that they have previously extracted from the atmosphere during growth phase, the operation would already be climate-neutral only by releasing the CO2. By reusing the waste CO2, the synthetic crude oil of the PtL plant is even achieving negative CO2 emissions. The second source of CO2 is the adsorption of CO2 directly from the ambient air in the Direct Air Capture (DAC) process. An intake manifold sucks in air into a filter with a solvent that extracts the CO2 and then binds it to a solid sorbent. Heat is then applied to the sorbent to release the CO2.

The carbon dioxide captured via DAC is stored in a balloon-like buffer. For further processing in the synthesis unit of the plant, the gas has to be compressed to a final pressure of 4.5 barg, which is technologically challenging. The CO2 must not be contaminated, since the catalytic process requires pure gases without oil pollution that could permanently reduce or outweigh the process.

Moreover, no CO2 must get lost during the compression process. The solution is a gas compressor developed by the long-established Swiss company HAUG Sauer Kompressoren AG. The HAUG.Neptune has already proven to meet the highest gas purity and process quality requirements in several industries and research institutes.

The HAUG.Neptune is a completely oil-free and dry-running piston compressor that can be used for continuous as well as intermittent operations, such as Atmosfair’s application. Plus, it is hermetically gas-tight during operation and downtime, not allowing any CO2 leakage. The reason is the non-contact and wear-free magnetic coupling, a HAUG Sauer Kompressoren in-house development, which can be used in the HAUG.Neptune for suction pressures of up to 14 barg.

The modular concept of the compressor series allowed for an individual configuration to Atmosfair’s requirements. Pressure level and flow rate were therefore optimally adapted to the application of Atmosfair via predefined cylinder modules.

Synthetic crude oil for the refinery 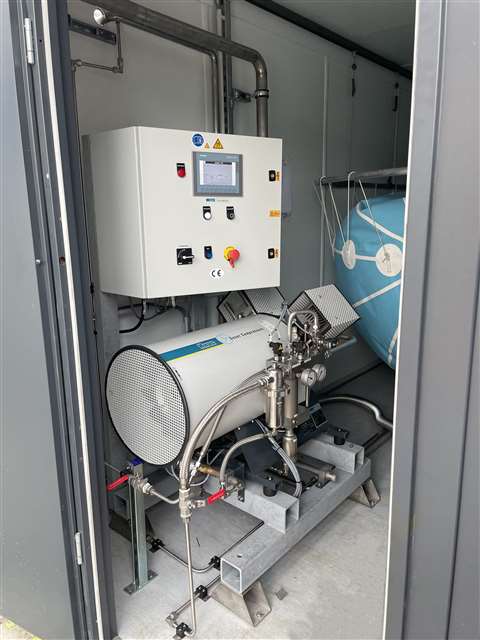 The last process step for the compressed CO2 is the synthesis. In the synthesis unit, carbon dioxide and hydrogen are converted into a syngas, which is then used to produce synthetic crude oil, the primary product for the e-kerosene. This is done with the Fischer-Tropsch process. At temperatures of 150°C to 300°C, long-chain hydrocarbons are formed in the presence of metal catalysts and eventually processed into climate-neutral kerosene in a refinery.

The development and manufacture of compressors of the HAUG product line are the core competences of the long-established Swiss company HAUG Sauer Kompressoren AG based in St. Gallen. Founded in 1896, the company has been part of the Sauer Compressors Group since 2016, where it forms the global centre for oil-free compression technologies. Sauer Compressors is a medium-sized German group of companies with 14 international subsidiaries.

The company looks back on more than 135 years of history and over 85 years of experience in compressed air and gas technology. These days, the focus is on the development, manufacture and sale of oil-lubricated and oil-free medium- and high-pressure compressors for applications in commercial shipping, industry, petro industry and the defence sector. The four product lines SAUER, HAUG, GIRODIN and EK focus on specific fields of application.

The SAUER line comprises oil-lubricated high-pressure compressors for a wide variety of applications, while HAUG stands for oil-free and hermetically gas-tight compressors. The GIRODIN and EK lines offer special compressors for the naval market. The modern reciprocating compressors for compressing air as well as a variety of gases reach pressures of 20 to 500 barg. 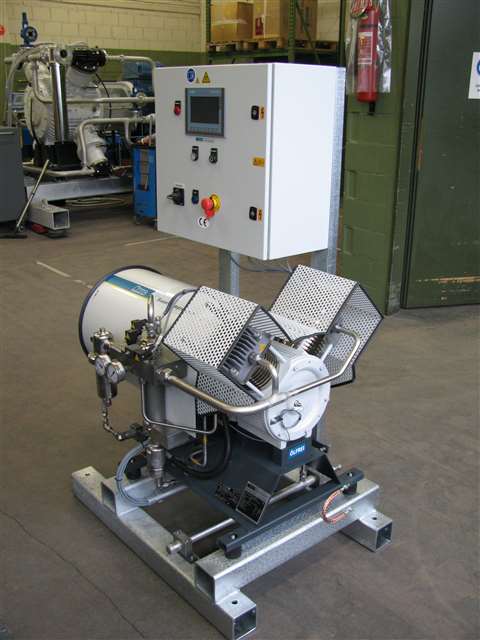 In addition to standard products, customised solutions are offered for every type of application for individual customers, OEMs and globally active companies. With a worldwide network of representatives and partners, Sauer is always close to its customers. By supplementing the compressor range with high-quality accessories, engineering services, assembly and service concepts, Sauer provides complete system solutions right up to complete turnkey installations. 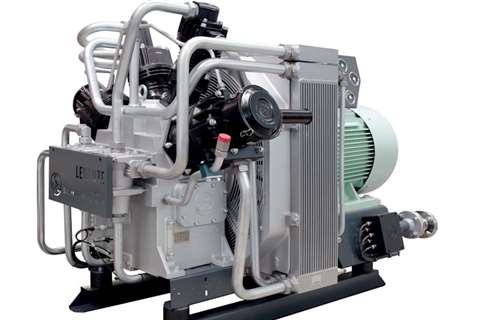