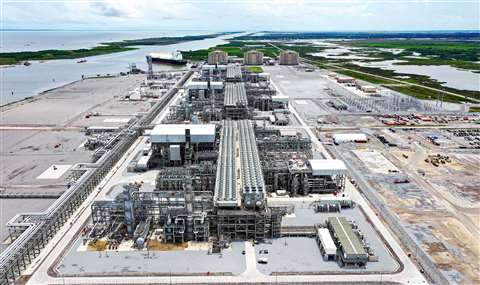 In January 2022, Cameron LNG requested a revision to its existing authorized permit from the Federal Energy Regulatory Commission (FERC) that proposes to modify the expansion project by adding a single LNG train with a production capacity of 6.75 Mtpa of LNG instead of the currently authorized two trains at approximately 4.98 Mtpa each. (Photo: Cameron LNG.)

UK-based INEOS Energy has signed a preliminary agreement with Sempra Infrastructure for the potential supply of 1.4 million tonnes per annum (MTPA) of LNG from North America for 20 years. Under terms of the agreement, LNG will be delivered free-on-board, from either the proposed Port Arthur LNG Phase 1 project or the Cameron LNG Phase 2 projects, the company announced.

The Port Arthur LNG development project is a 13.5 Mtpa, fully permitted facility on a 3,000 acre site in Jefferson County, Texas. In addition, Sempra Infrastructure has signed an preliminary agreement with the Cameron LNG partners for the development of the proposed 6.75-Mtpa Cameron LNG Phase 2 project in Hackberry, Louisiana.

David Bucknall, CEO INEOS Energy said, “This agreement is an important part of our strategy as we build a network of liquefaction, shipping, and regasification capacity to deliver affordable, cleaner and reliable energy to our businesses and customers in Europe and around the world.”

INEOS is committed to achieving net zero by 2050 across its operations. The company is working to decarbonise the supply chain through carbon capture and storage and provide optionality for alternative sources of energy such as its leadership in the production of hydrogen, as we develop them over time.

“INEOS is one of Europe’s largest end-users of natural gas and we look forward to building a long-term relationship with a company that shares our vision of increasing the world’s energy security while simultaneously advancing lower-carbon energy sources,” said Justin Bird, CEO of Sempra Infrastructure. “This HOA demonstrates our ongoing momentum in advancing our next generation of LNG export facilities with an eye toward supplying US natural gas to some of the world’s leading energy and manufacturing companies.”

The agreement is a preliminary non-binding arrangement, and the development of the Port Arthur LNG and Cameron LNG Phase 2 projects are subject to securing all necessary permits, signing engineering and construction contracts, obtaining financing and a final investment decision, INEOS said.

The agreement comes about five weeks after Sempra announced a similar LNG supply agreement with Polish Oil & Gas Company (PGNiG.) INEOS Energy is a division of INEOS, a global manufacturing and chemicals company. Sempra Infrastructure is a division of Sempra.