Green hydrogen down under 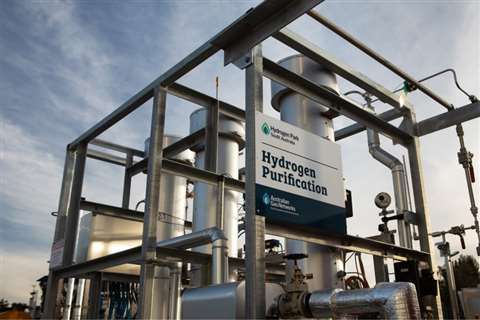 Renewable energy in Australia relies mainly on a combination of wind power and solar photovoltaics. Both sources are variable, they come and go with the weather. “You’re producing energy at times when you may not need it and at other times when you need it, you’re not producing anything,” says Michael Bielinski, Head of Projects, Siemens Energy Asia Pacific. “Large lithium-ion batteries might solve that problem intermittently, for 24 or 48 hours. But you really need a solution for medium to long-term energy storage – and that’s where hydrogen comes in. The reason we talk about hydrogen is because it’s a way to store variable renewable electricity and decarbonize hard to abate sectors that cannot be easily electrified.”

Hydrogen is the most abundant element in our universe. Yet, unlike the fossil fuels on which the developed world has depended since the 1880s, it is not to be found lying about under the ground. Currently, the available hydrogen gas is mostly sourced from fossil fuels with a small amount produced by electrolysis of water in electrolysers. If those electrolysers use renewable electricity the resulting hydrogen is called ‘green hydrogen’ and is entirely carbon-free. The renewable energy used in the process is therefore ‘stored’ in the hydrogen.

In recent years, the global buzz around hydrogen has been hard to ignore. An economy based on hydrogen instead of fossil fuels is one of the cornerstones of the European Union’s Green Deal. And Australia and Germany have signed a Hydrogen Accord to accelerate the development of a hydrogen industry.

Removing regulatory barriers is certainly a key area to help the hydrogen economy take off – the other is helping to create demand. The time is ripe to take hydrogen solutions into commercial application, argues Bielinski. “If we can bring the unit cost of hydrogen down by achieving scale in hydrogen production, then it starts to get interesting for everybody. There’s no doubt about it, producing green hydrogen today is expensive. The goal for us is to get it down to AUS$2 a kilogram,” he says. This is the 2030 target laid out in Australia’s National Hydrogen Strategy.

“Right now it’s a chicken-and-egg situation,” he says. “We need to invest in hydrogen infrastructure, and we need the demand. We know that by 2050, a really significant portion of our energy as a society is going to come from hydrogen, but how to get there, how to pull yourself up by the bootstraps?” One bootstrap comes in the form of a 1.25-megawatt electrolyser that Siemens Energy recently commissioned for its customer Australian Gas Infrastructure Group (AGIG).

“What’s really making the difference this time round is the falling cost of renewable electricity,” explains AGIG’s chief executive Craig de Laine for whom hydrogen is the key to transitioning his business to a low-carbon future. “The second aspect to making green hydrogen production more economical is the capital costs of electrolysers and that will fall as demand grows. The third factor is keeping the electrolyser running. If you only use it a few hours a day, each kilogram of hydrogen produced will be expensive. So you need readily available, cheap renewable power, ideally with solar and wind complementing each other.”

Blending hydrogen is the first step

AGIG and Siemens Energy collaborated on Australia’s first commercial green hydrogen application in Tonsley, a suburb of Adelaide. Hydrogen Park South Australia (HyP SA) officially opened in May 2021 and is an entry-level hydrogen project featuring a 1.25 megawatt Proton Exchange Membrane electrolyzer that blends H2 into the local gas network. Currently, more than 700 local customers in Mitchell Park in suburban Adelaide receive a gas blend containing 5 percent hydrogen. HyP SA has a maximum annual capacity of 175 tonnes of H2 per year; 1 tonne of green hydrogen has the potential to avoid more than 7 tonnes CO2-e from the combustion of natural gas.

“This is the beauty of blending a small percentage of green hydrogen,” says de Laine. “The gas distribution network in Australia is now almost entirely plastic, able to take up to 100 percent hydrogen without any modification – so, no problem at all. We know the meters and appliances in the customers’ homes can take at least 10 percent renewable hydrogen. That’s been our selling point: The user experience will be exactly the same.”

And it solves the chicken-and-egg problem, according to de Laine: “The blending is a brilliant anchor use case because you can build demand without customers having to do anything different. Then once you’ve got that green hydrogen production, you can expand to 100% hydrogen networks and to other carbon-intensive sectors such as heavy transport and even produce green steel, green aluminum and green ammonia.”

Bielinski agrees that this is the way forward: “And then you continue by building hydrogen production plants at industrial scale which will bring the cost per unit down. The next generation will be 10 to 20 megawatts in size. If Australia is serious about implementing a hydrogen economy relatively rapidly, the industry will soon be committing to deploy electrolysers scaled at hundreds of megawatts. Although that’s hundreds of millions of dollars of capital cost it allows economies of scale and that brings costs per kilogram of green hydrogen produced down.”

Currently Australia earns billions of dollars exporting coal and as the world’s largest exporter of liquefied natural gas (LNG). Hydrogen certainly has the potential to be the green, clean energy carrier that the world needs and could be exported just like LNG today. “The really big prize for Australia is export. Hydrogen will be that new zero-carbon export industry that can be just as large because we have virtually unlimited solar and wind resources in Australia,” says de Laine. Matching the capacity of LNG, however, will require an installed electrolyser capacity of hundreds of gigawatts. “We’re working now on projects which are between 10 and 50 megawatts – so, up to 40 times the size of the HyP SA. To fulfil our ambition to have all our networks on a 10 percent blend by 2030, we need one gigawatt of installed capacity.”

As a solutions partner, Siemens Energy’s Michael Bielinski is well aware of the enormous task ahead: “I wouldn’t want to understate the size of the challenge, but I think we’re getting clearer and clearer on what we have to do if we are to get to net zero – and that involves a hydrogen economy.”

Getting this hydrogen economy off the ground takes the right combination of persuasion, technology and economics. For now, AGIG’s pioneering project in suburban Adelaide seems to tick all the boxes.

This article was originally published here.