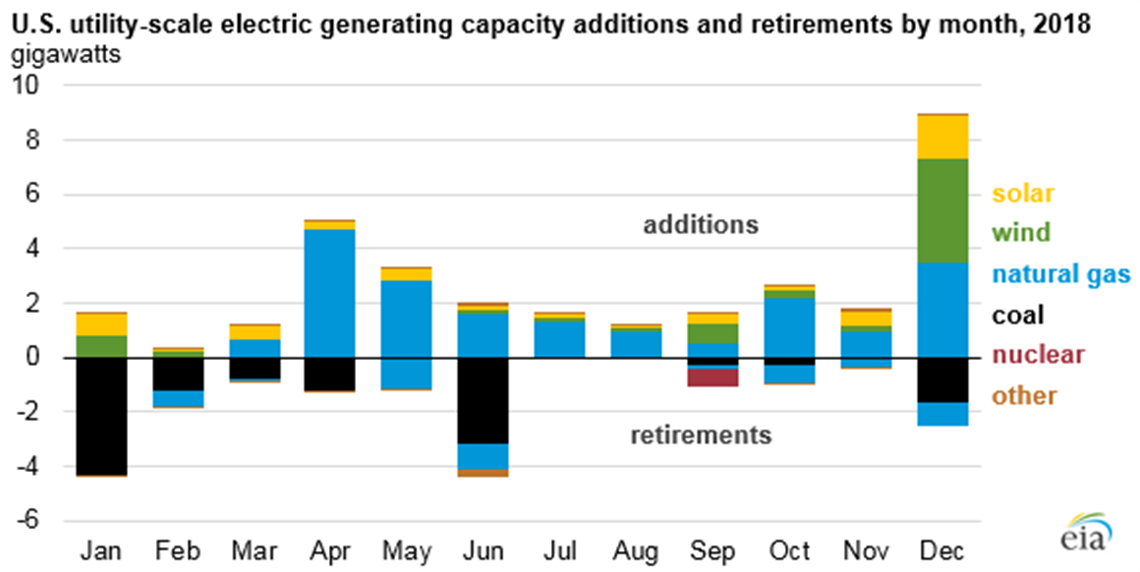 As of December 2018, 31.3 gigawatts (GW) of generating capacity were added in the United States in 2018, with the bulk being fueled by natural gas, according to new information from the U.S. Energy Information Administration (EIA).

The 2018 annual capacity additions were the largest since 48.8 GW were added in 2003. Most of the additions happened in the second half of the year, while the retirements occurred mostly in the first half.

Almost 90% of the 19.3 GW of the natural gas-fired capacity in the United States added in 2018 were combined-cycle systems, EIA said. Pennsylvania accounted for almost 25% (4.4 GW) of all 2018 domestic natural gas additions, and three other states — Maryland, Virginia, and Florida — accounted for about 30%.

The 18.7 GW of U.S. generating capacity that retired in 2018 were primarily coal (69%), natural gas (25%), and nuclear (3%) generators, with the remainder composed mostly of hydroelectric and petroleum generating capacity. Although 4.7 GW of U.S. natural gas-fired capacity retired in 2018, 93% (4.4 GW) of those retirements were from natural gas steam and combustion turbine units, which are less efficient natural gas-fired generating technologies that typically operate at lower capacity factors than more efficient combined-cycle units, EIA said.