The rapid expansion of renewable energy sources, especially solar and wind, has led to some significant shifts in the mix of U.S. electricity generation over the last decade.

The amount of solar power generating capacity in the U.S. electric power industry at the end of 2021 was 20 times its level 10 years earlier. The capacity of wind-generated electricity generation is more than twice what it was 10 years ago, the EIA reported.

Another shift in the mix of electrical energy sources has been the decline in the use of coal-fired power plants since their peak output in 2007 and the increasing use of natural gas, primarily as a result of sustained low natural gas prices, the EIA reported.

However, the trend of increasing gas consumption reversed in 2021 when the cost of natural gas consumed at U.S. electric generators averaged $4.88 per million British thermal units, more than double the average cost the prior year, the EIA reported.

In its latest outlook, the EIA forecast that most of the growth in U.S. electricity generation in 2022 and 2023 will come from new renewable energy sources. The electric power sector had an estimated 63 gigawatts (GW) of existing solar power generating capacity operating at the end of 2021. The EIA forecast solar capacity will grow by about 21 GW in 2022 and by 25 GW in 2023.

The increase in renewable electricity generation over the next two years is expected to lead to a lower need for fossil-fueled generation. Although the EIA has forecast natural gas prices to decline for electric generators, the operating costs of renewable generators will continue to be lower than natural gas-fired units.

“We expect that regions of the country with the largest increases in renewable capacity, such as Texas and the Midwest/Central regions, will experience the largest reductions in natural gas generation,” the EIA stated. 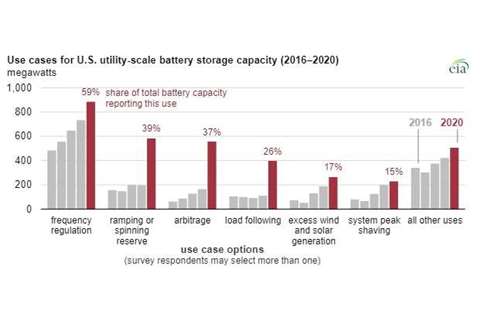