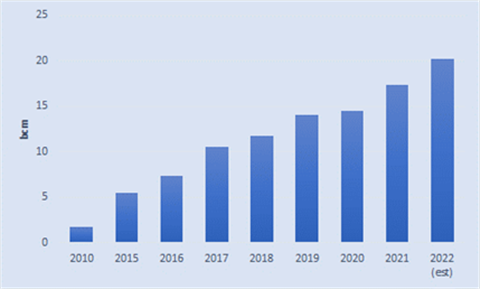 The evolution of China’s storage working gas capacity from 2010 to 2022. (Graph: Cedigaz.)

The Russian invasion of Ukraine has shaken up global gas markets and placed supplies and storage as a top priority in gas importing countries. In response, the world’s gas industry is expanding its underground storage capacity, with a new series of projects expected to boost worldwide storage by 133 bcm, a recent study has shown.

The new projects would boost the world’s working storage capacity, which is currently around 424 bcm. The study, conducted by the international trade association Cedigaz, noted that the underground storage market remains concentrated in the U.S., Russia, Ukraine, Canada and Germany, which collectively account for about 70% of the world’s storage capacity.

But growth in working storage is in new areas, where gas markets are growing quickly. Seven new storage facilities were commissioned in 2021, six of which were in China and the seventh in Sharjah. The new facilities offset the declines in main storage markets, leaving the overall amount of working gas storage essentially unchanged, Cedigaz reported.

New regulations in the European Union require that stock levels are filled ahead of winter, to at least 80% by 1 November and 90% in later winters. An increase in LNG imports, primarily from the U.S., and gas pipelines from Norway and Azerbaijan helped Europe fill its stocks to at least 95% of their maximum capacity by Nov. 1.

Meanwhile, European countries have reopened some previously closed storage facilities and have expanded other facilities, according to the study.

The study noted that the limited gas exports for Russia have encouraged it to look to Asia, but that strategy will require significant investments in gas pipelines and storage facilities. Meanwhile, China may not want to rely too heavily on a supplier that has shown a willingness to use gas as a political weapon.

In China, working gas capacity totaled more than 20 bcm at the end of October. But, the global gas crisis has accelerated the construction of new underground storage facilities and total capacity is expected to reach 55 to 60 bcm in 2025, accounting for about 13% of expected natural gas demand.

New facilities are under construction in Brazil, the study noted.